Well I guess it had to come eventually. It was time to go home. I hate this part of the trip. I’m usually ready after a long trip like this but it’s just been the best trip, I don’t want it to end.

I woke before the alarm and it was probably a good job I did as although we packed up most things last night, we seemed to have to do a lot of packing again today. I had a shower and left Simon making breakfast – muffins and bagels we’d bought a few days before in Publix. We’d hardly made a dent in them but the whole packet of them cost less than one single bagel in Gasparilla grill so it was still worth having – especially as we have a toaster in the studio.

We got ready and called bell services to look after our bags for the day while we went to play in the Magic Kingdom.

We were cutting it fine time wise for the Trolley show but I thought we could make it. What didn’t help was we arrived at the monorail just as one was leaving and it took 10 minutes before the next arrived 🤦🏼‍♀️ Simon blamed me for saying ‘we will be fine as long as the next monorail comes quickly’ doh! I jinxed us ha 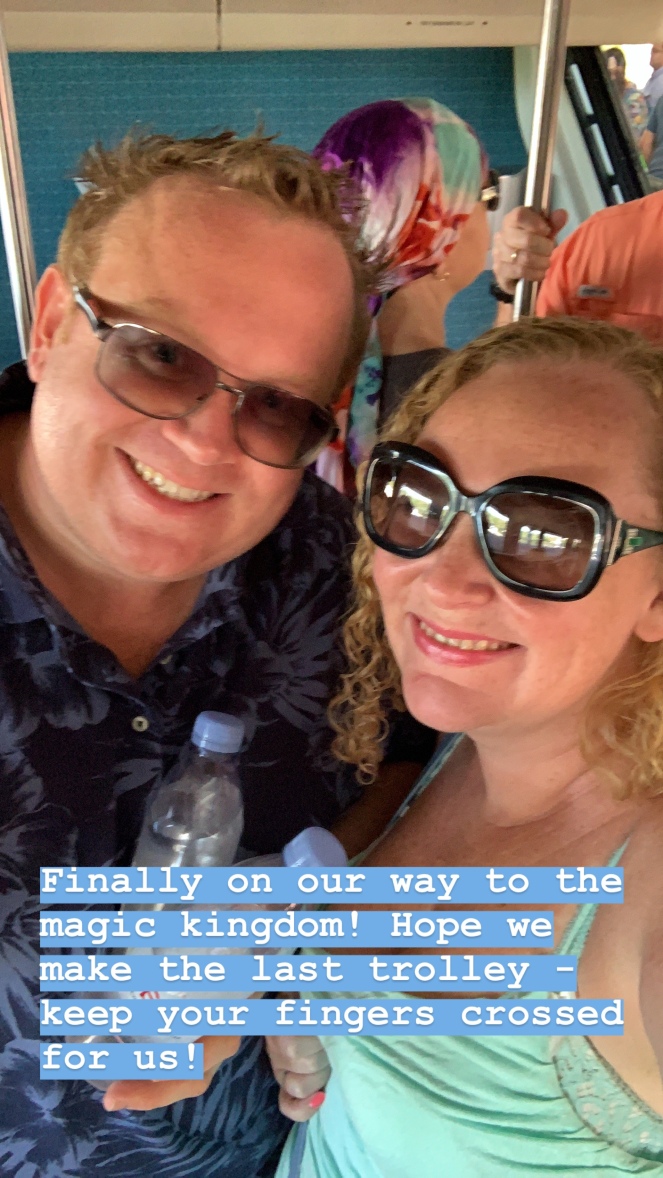 We did manage to make the last trolley show in front of the train station though 😍 cue happy Watson’s! I was so pleased as Alexx was on today and we’ve hardly seen her all trip so we got to see her again before we left. 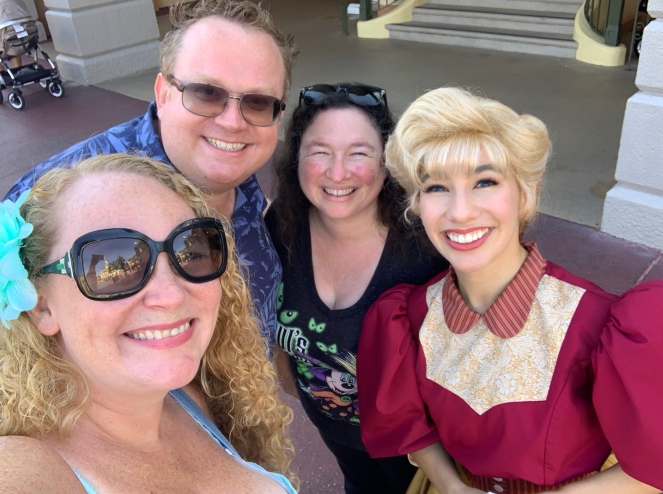 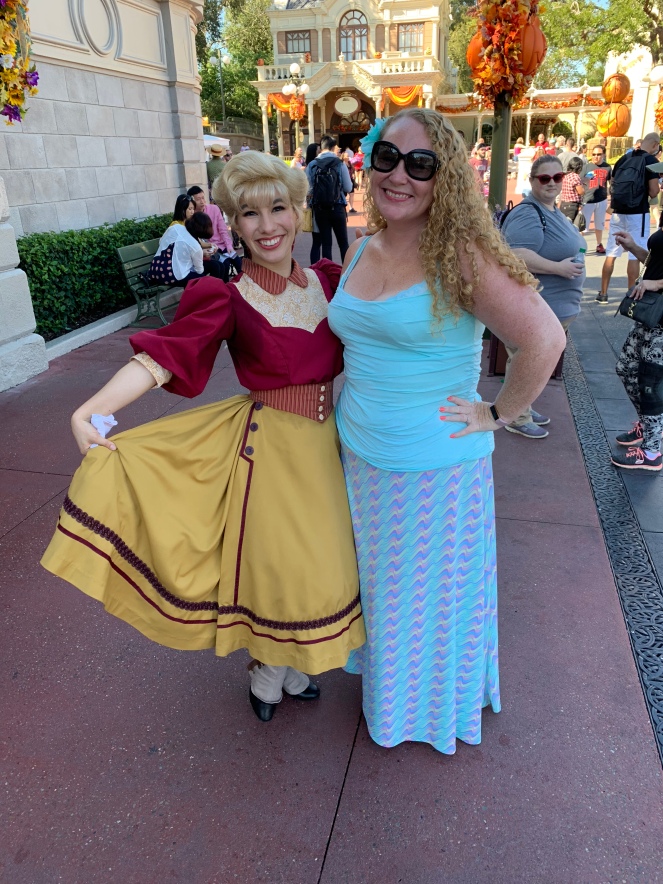 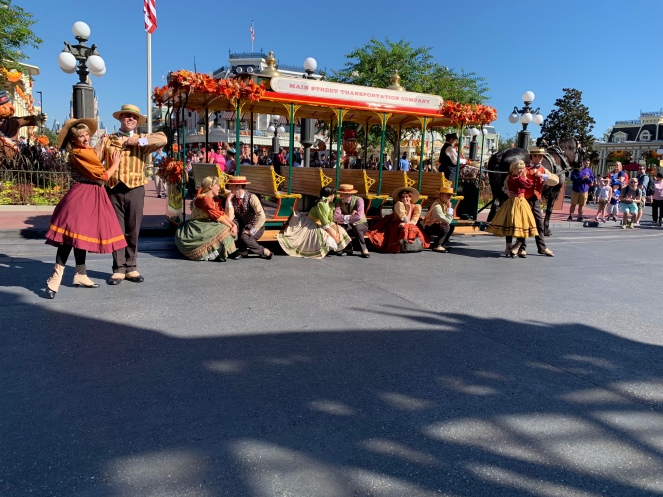 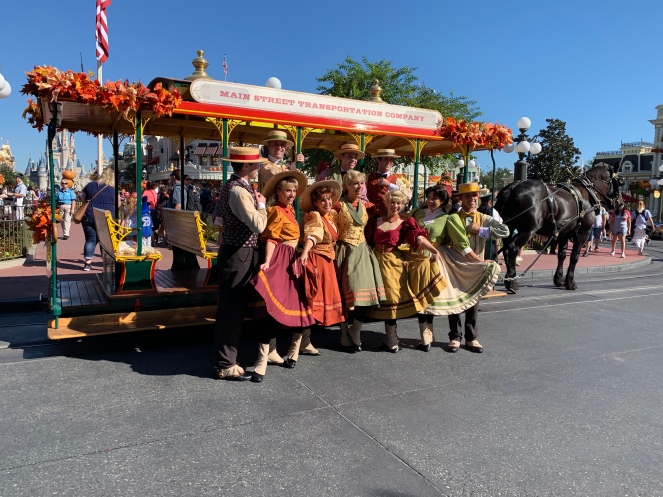 After chatting with Alexx and her mum for a little while we popped into Starbucks to pick up a mug for a friend back home. We manage to walk out just as Move it, Shake it was going past… So of course we had to head up to the hub to dance away (we were also hanging around Main Street as Liz and Nicole were meeting us at any moment). Shook our tail feather with Corey 😍 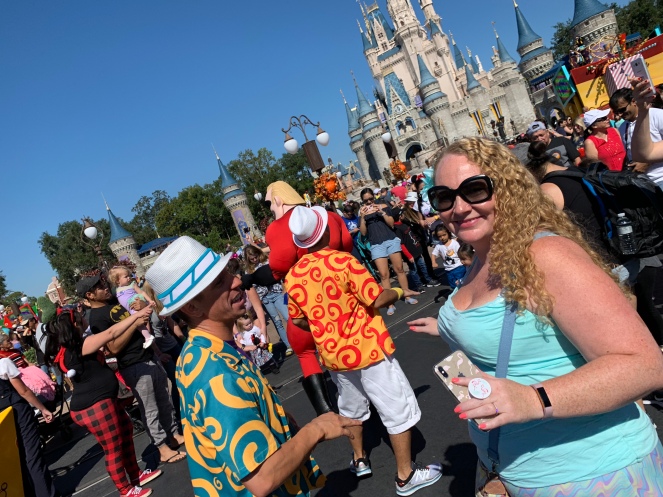 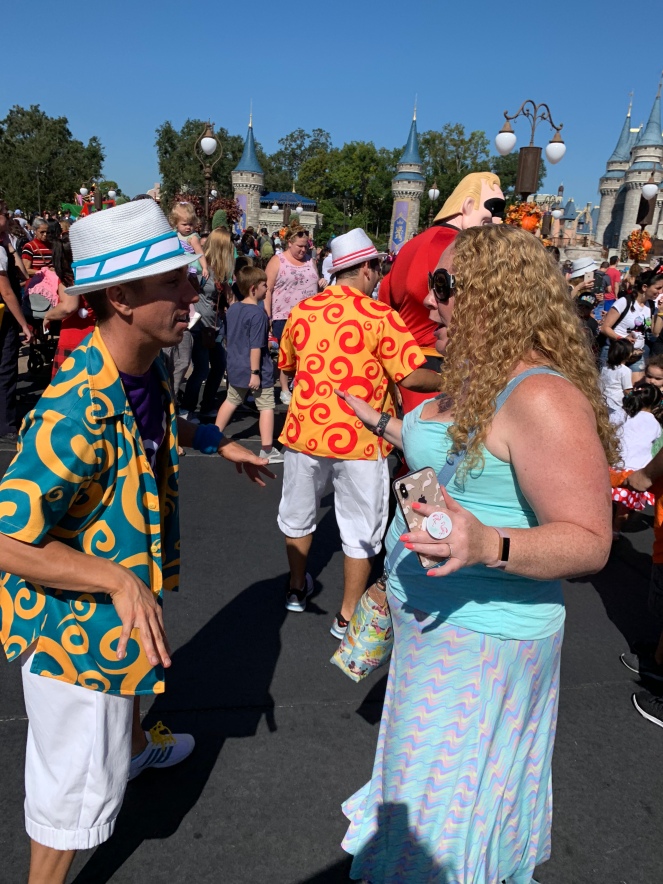 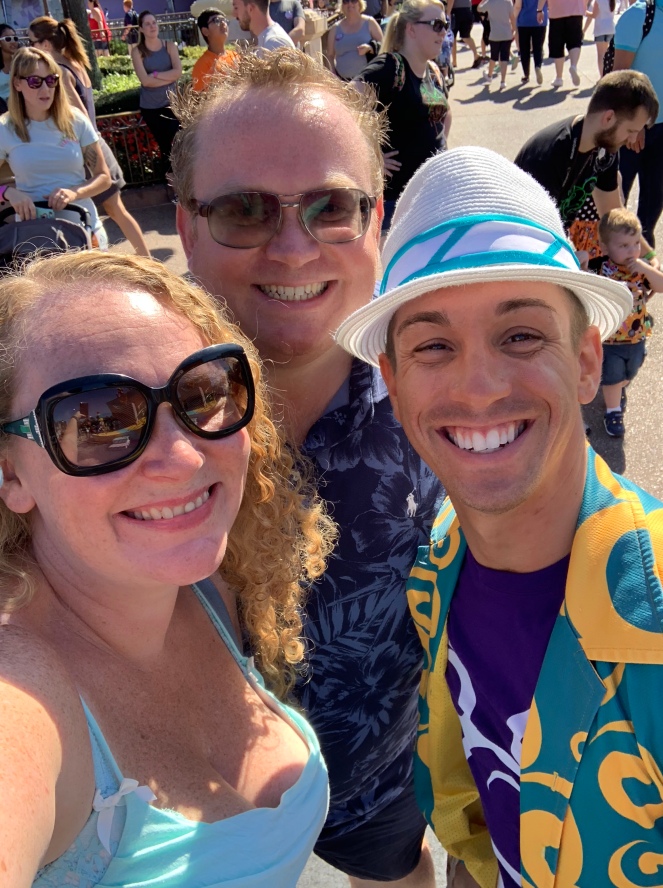 We were lucky and bumped into Noah Lott and Miss Hilderguard on Main Street. I forget the name of the other lady but she was so lovely too. She asked how Simon and I got together and loved our cheesy story. It was time for them to go inside so we grabbed a quick picture together before they disappeared. 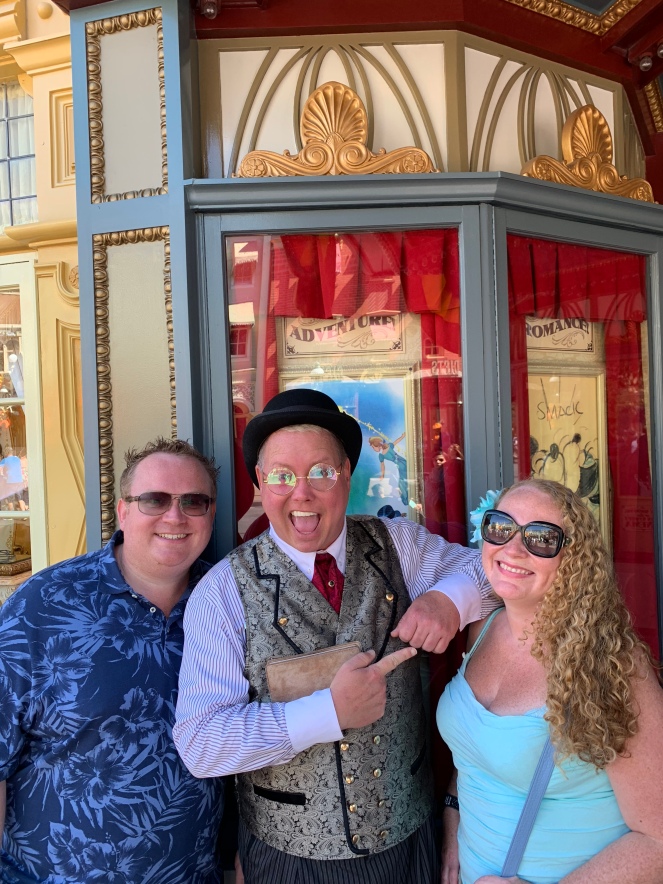 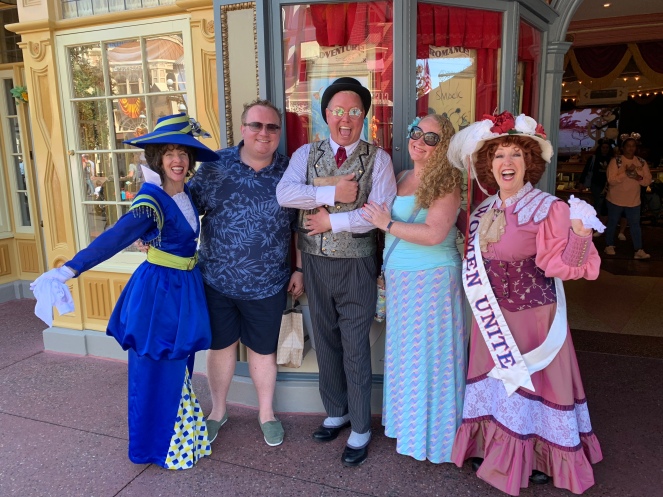 We stood there waiting for the girls and I checked again for a Be Our Guest lunch and lucked out and found one! This was the perfect end to the trip 😍 turns out the girls had been checking too, it’s often worth checking the night before as people can cancel free of charge until midnight the day before so sometimes reservations can be picked up.

The girls arrived a couple of minutes later and we walked straight over as we were all starving. The line to check in was crazy – as was the line to order food 😐 So I pulled up the website and ordered for everyone only to finish in time for the guy checking on everyone in line to say it takes 24 hours to get logged so we still had to wait in the huge line. I asked him when it changed to take 24 hours as I’ve done this plenty of times while stood in the line, he said he started in August and it’s been the case since then but he said we could try it out and if it didn’t work we could join the long line again. We decided to risk it and yay, it was already ordered when I scanned my band – all I had to do was pay! Another tip of the day there from me – order in advance so you don’t have the huge line. The guy was really nice so I popped back to let him know we were all good and thank him for letting us try.

We grabbed a table in the Rose room – it’s the quietest room and a total fave of mine for that very reason. No one ever wants to sit in there as it’s not the ballroom or the west wing so you can always grab a table.

Our food was there before long, it was all so good. Simon got a french dip and I got the turkey sandwich. And of course we all got a masters cupcake each – man those things have shrunk! 2 bites and it’s gone. I actually asked someone when they got so small and she said they’ve always been that size. Nice try love but nope! They definitely use to be bigger. Next time I might order 2 😆 #fattyfatfat 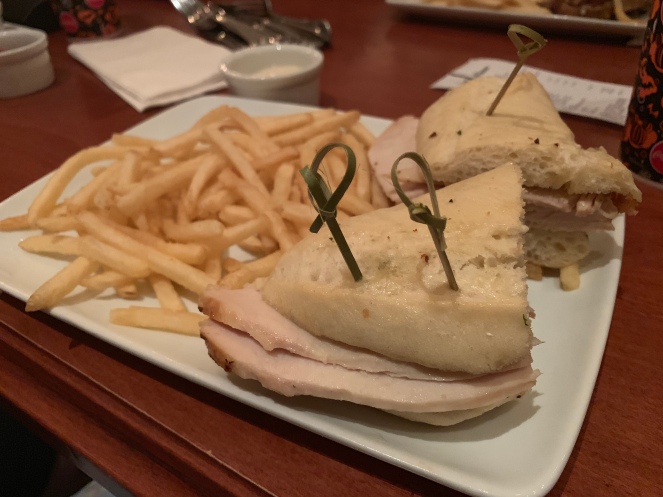 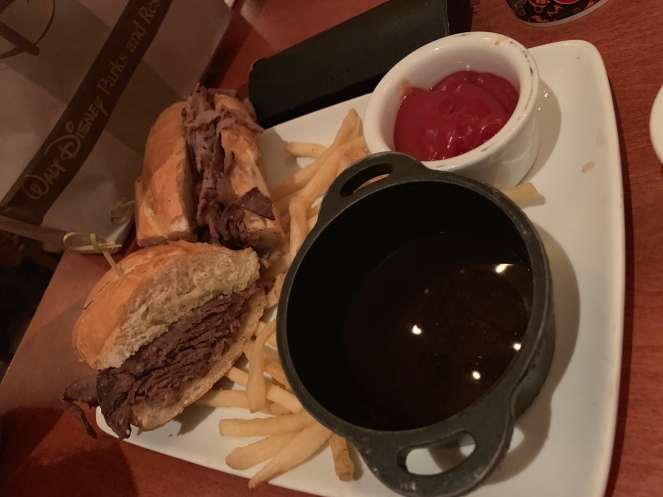 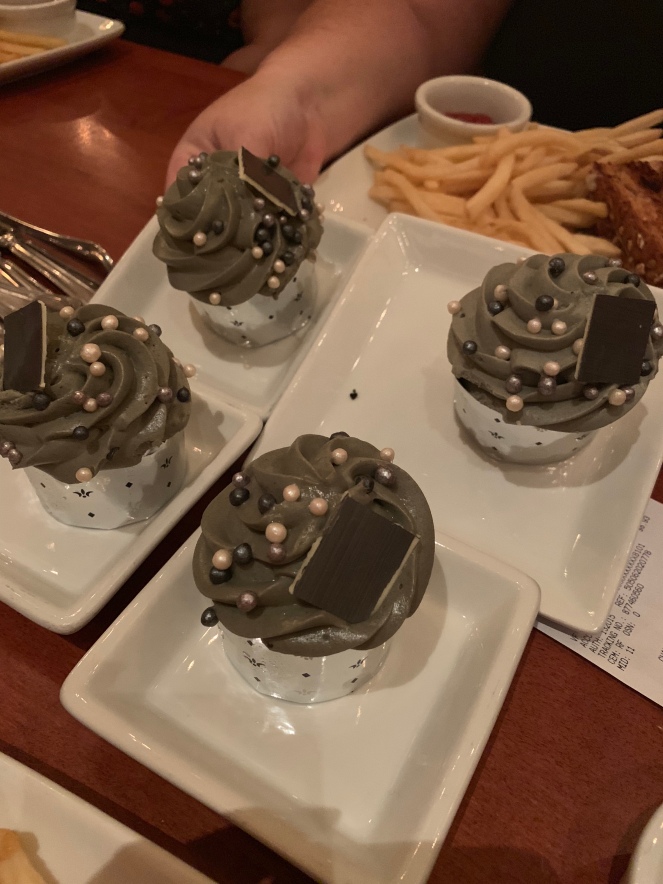 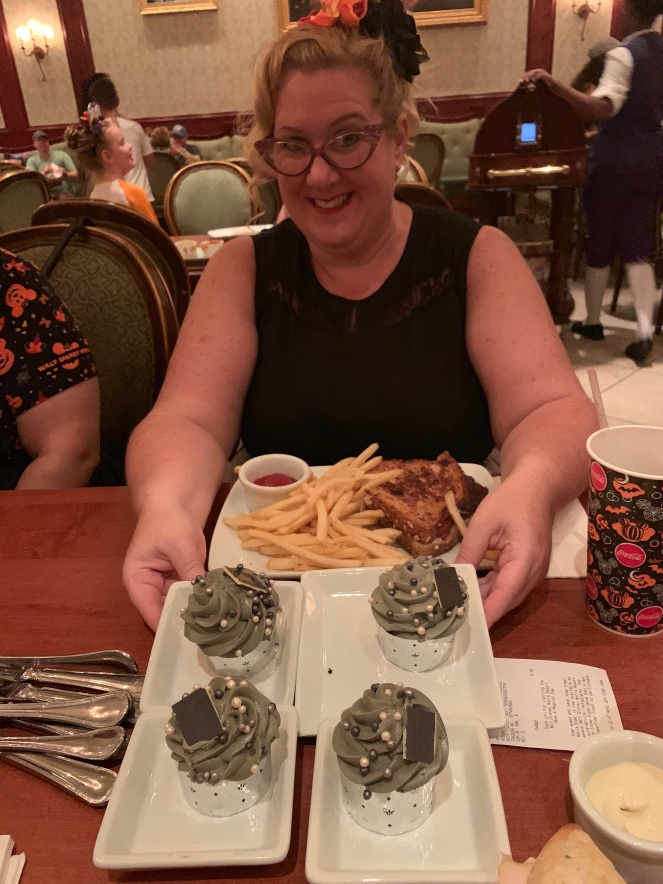 With full tummies we went to ride the Peoplemover, no line today so clearly not too busy. Love this ride 😍 total hidden gem. Usually if there’s not much of a line they will let you ride twice too! Not many rides in Disney where you can do that.

We hopped off and made our way for the train as we’d not been on it all trip. We caught some of the parade on the way too, I ran ahead and got a spot right at the end of the parade next to the barber shop. The others caught up just at the last float went past.

Straight up to the train after. We just missed out getting on one as it was full so we had to wait 10 minutes for the next. But it was nice up there as there was a breeze – it was back to being hot. Fall lasted about a day (Saturday to be exact – when we were freezing in discovery cove ha!). 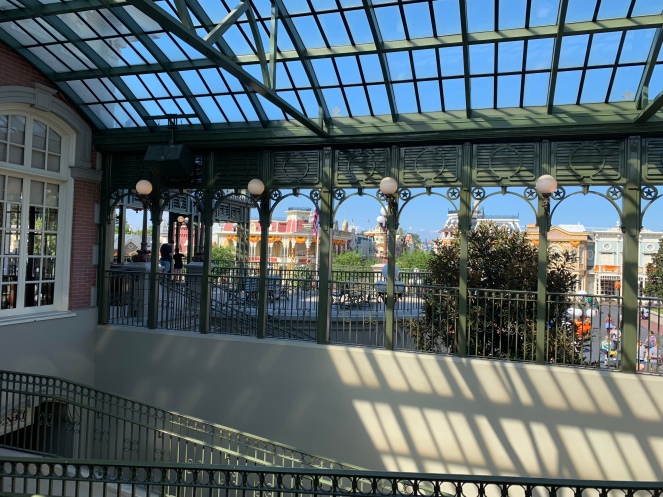 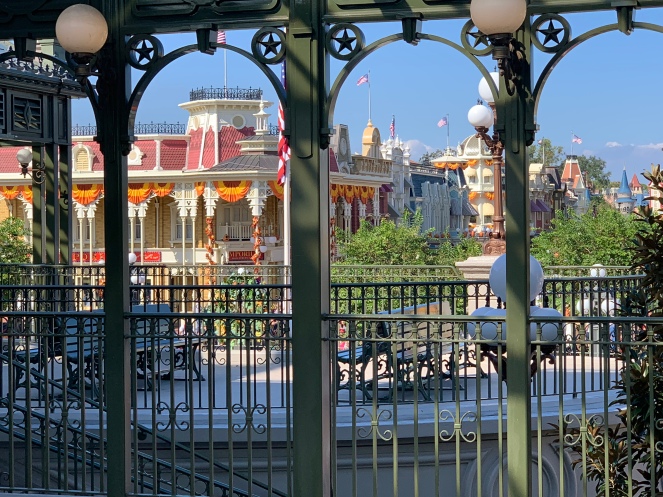 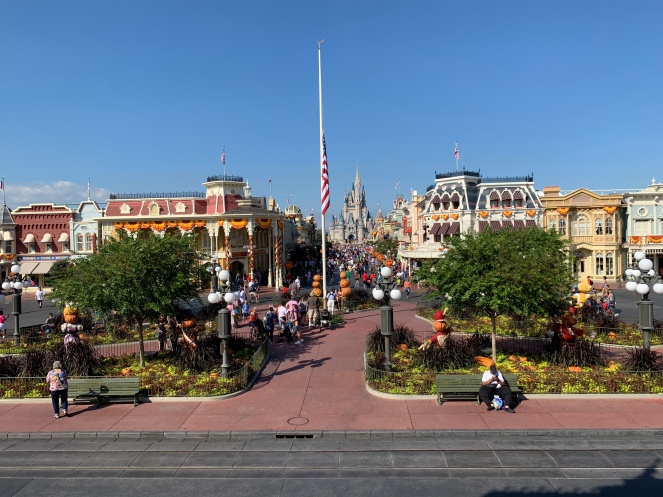 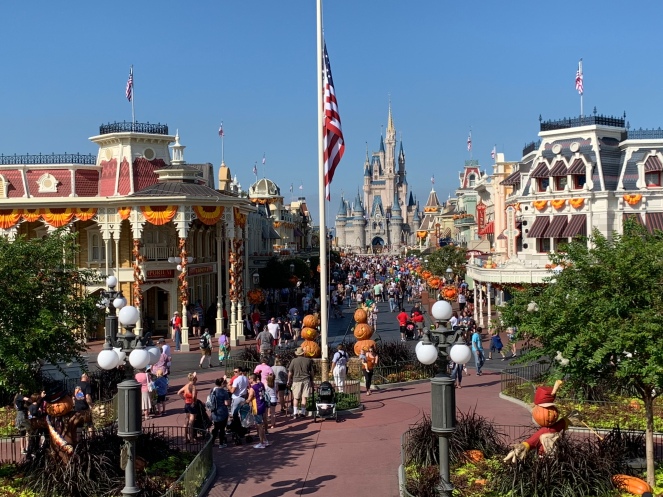 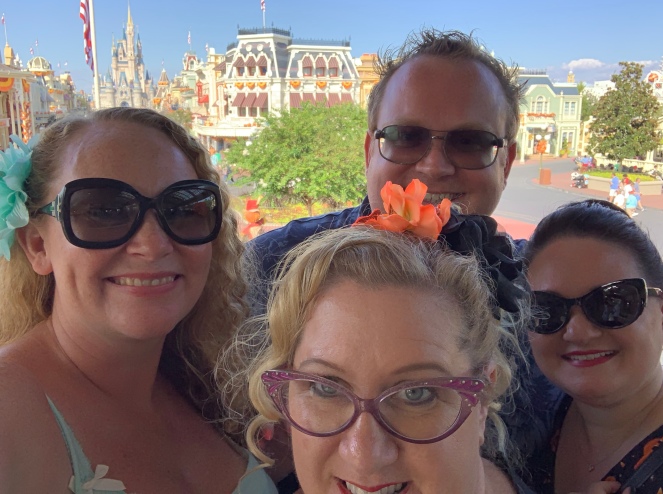 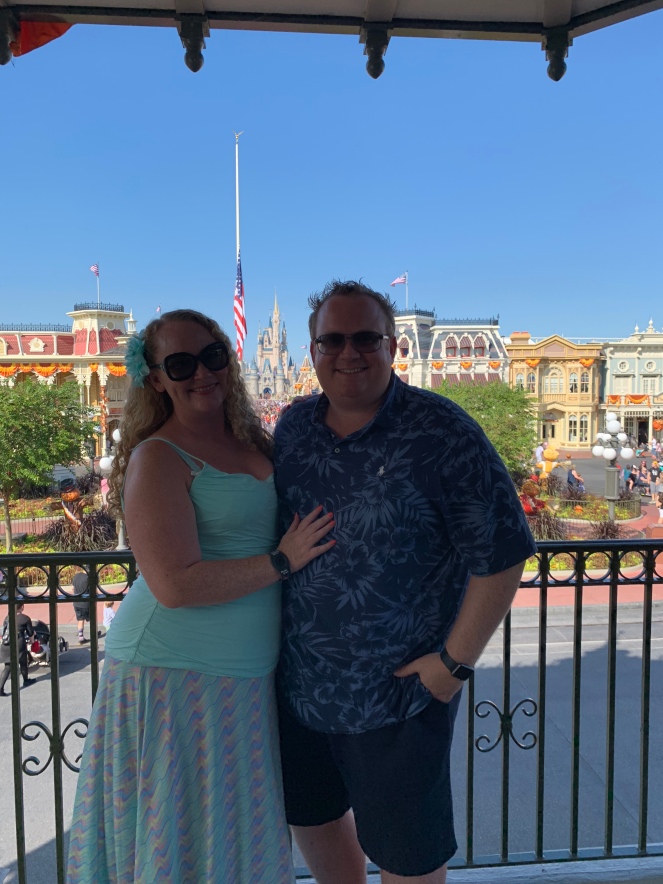 All the way around the park and back to the front. It was then time to say goodbye to the Magic Kingdom 😢 We made our way down to the boat back to the GF together. 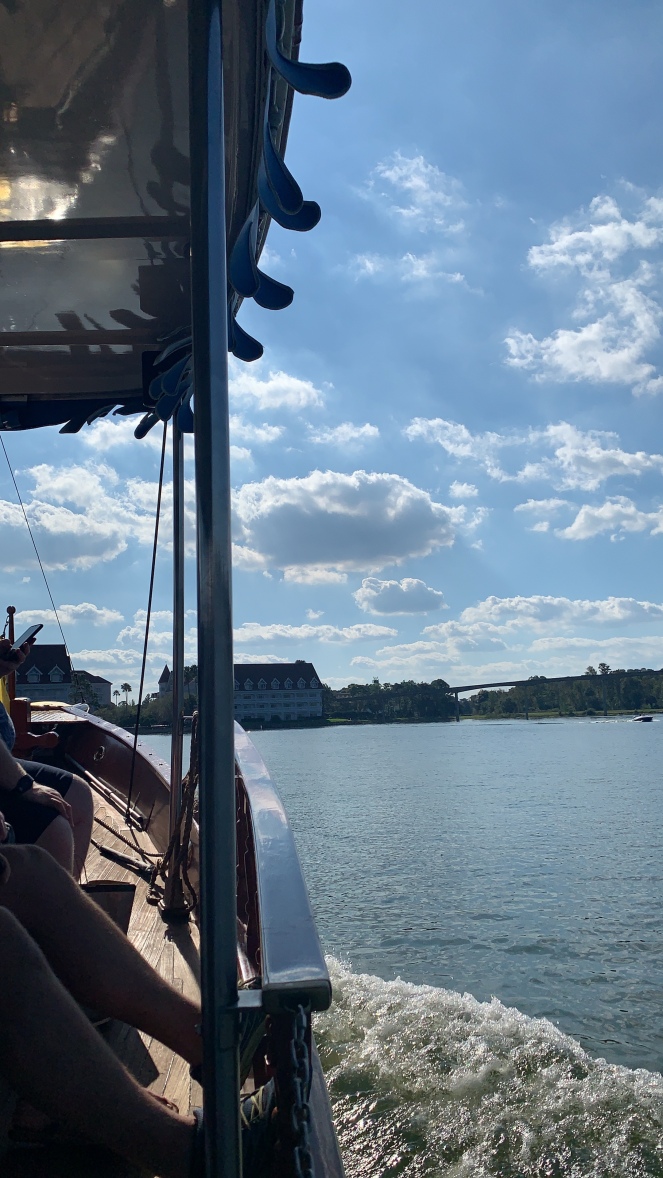 I gave the bellman our ticket and he grabbed the cases while Simon went to get the car ready to load up. The bellman Scott was telling me how it’s a really slow day and he wasn’t doing anything (as Simon was taking a while in the car and I apologised for it), when Simon did arrive he wheeled the cases over on the trolley and walked back to his little podium and spent the next 10 minutes trying to look busy while we loaded the car – I put the money away I was going to give him for helping lol guess the upside was we saved $10

Loaded up we popped over to the Polynesian resort – Simon wanted some Hawaiian goodies, some macadamia nuts and cookies. I obviously wanted a Dole Whip (I always want a Dole Whip). I got a swirl and shared it with Simon while we sat in the lobby. 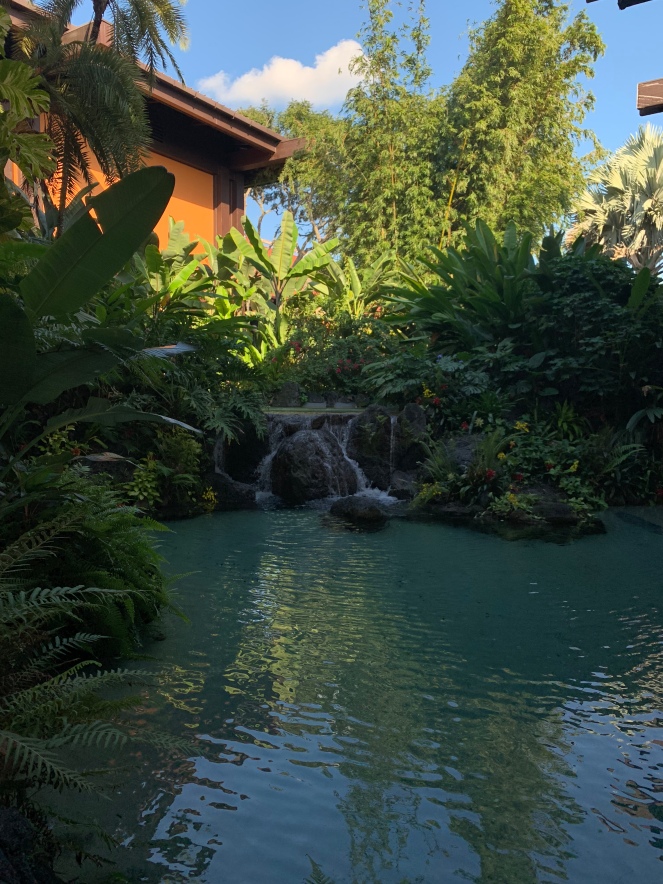 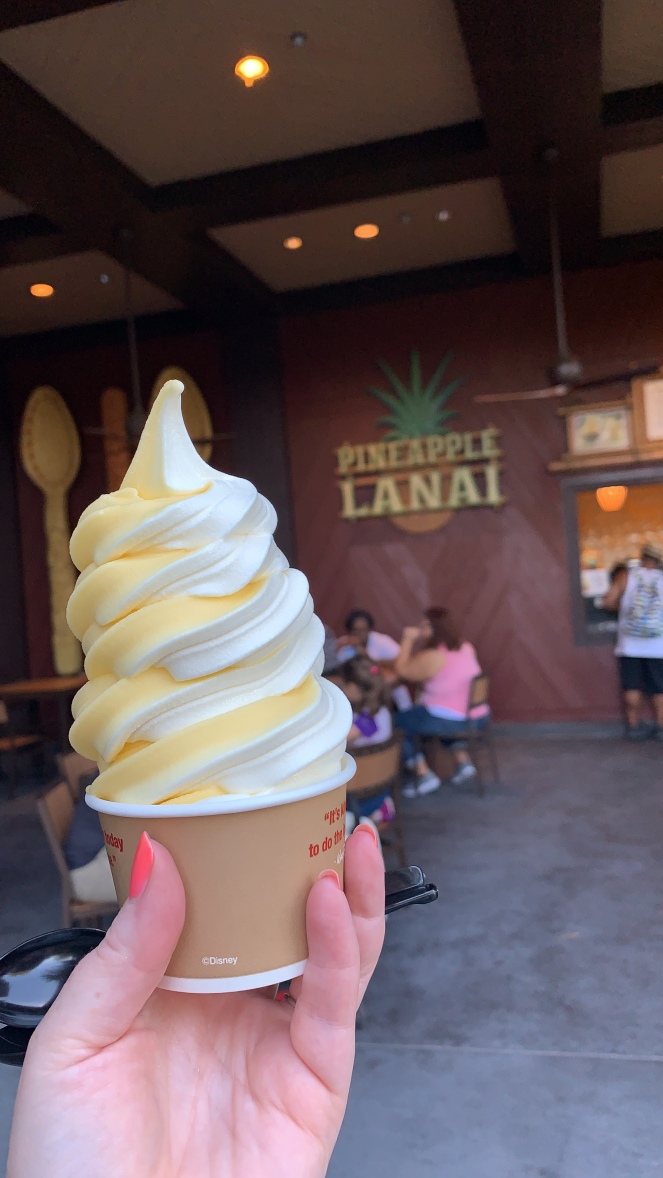 Full and happy we said our final goodbyes to Disney and made our way to our friends Carrie and Mark, they are super amazing and look after our things in 2 boxes in their garage so we don’t have to cart as much over. Mark also had some cookies for us for the journey (did I mention what amazing friends they are?!).

We stopped in for 20 minutes or so but we had to make our way to the airport 😭 so we couldn’t stay too long.

Arrived at the airport and dropped the car off. I went to pay for a trolley for the cases and ended up with a dodgy one that the brakes were stuck on – Simon cursed me all the way in 😂🙈

Bag drop done, a quick pop into the Disney shop for any last minute impulse purchases and through security. Security was the emptiest I’ve ever seen it, maybe cause we were an hour later than normal? (Our flight was an hour later as the clocks have changed in the UK but not USA yet).

The other side of security though is absolute bedlam, there’s not enough room for anyone to grab their things from the belt. They need little stations for you to take your trays of stuff to empty like in Gatwick. In fact here they funnel into smaller areas the other side of the security scanners so there’s less room than where you put your things on. It’s really crazy.

Finally we were sorted again and we hopped on the little monorail to the gates. First job was to get changed, I was completely freezing in the airport. Once changed we went to get food. Outback was only open at the bar so we decided to try Bahama Breeze – I’m now a convert compared to Outback, it was lovely! I’ve never been before as I didn’t think there was anything I could eat but I got a burger swapping it to chicken. Simon got coconut shrimp tacos which looked amazing too. 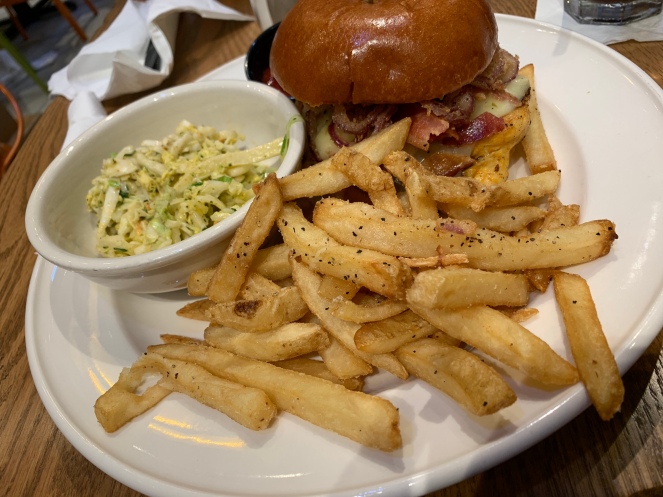 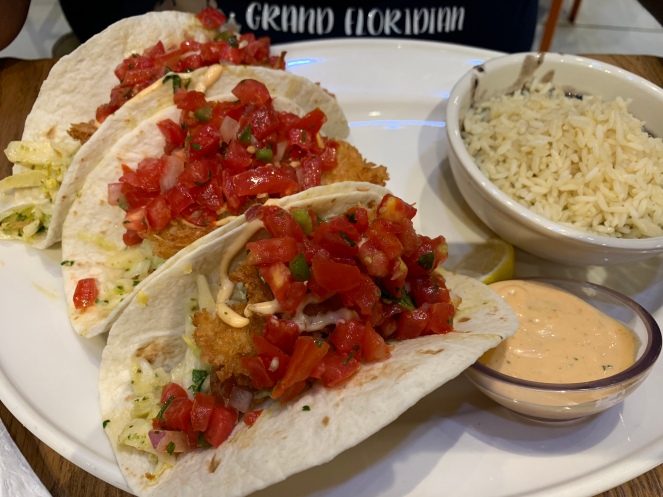 Paid up we made our way to the gate, found out we wouldn’t be boarding for another 30 minutes so we went back to look in the shops for a bit to pass the time. We didn’t buy anything though.

We were soon boarding, as soon as we sat down in the seats the arm fell off Simon’s seat. Great. He tried to get it back on but it kept falling off, the stewardess said an engineer was coming to fix it but I watched the bridge being taken back so I guess that wasn’t happening. It fell off a couple more times and scared everyone around us as it made so much noise 🙈 it nicely fell off again mid take off / I’m sure that helped any nervous fliers. Nice stewardess tried to fix it but couldn’t, in the end she got some heavy duty tape and taped it up. She offered Simon to move to the only empty seat which was next to someone else and in the bulkhead but he didn’t want to move away from me. 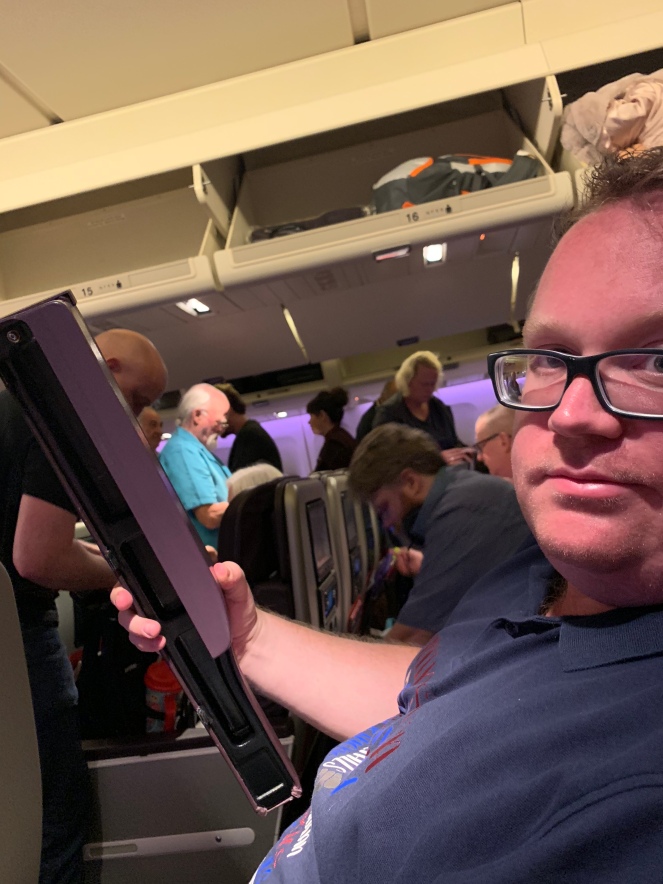 We were both shattered so as soon as the seatbelt signs were off we were putting on our blankets and closing our eyes. I slept for about 4 hours non stop and then watched a bit of Incredibles 2 before sleeping again, Simon slept practically the whole way. 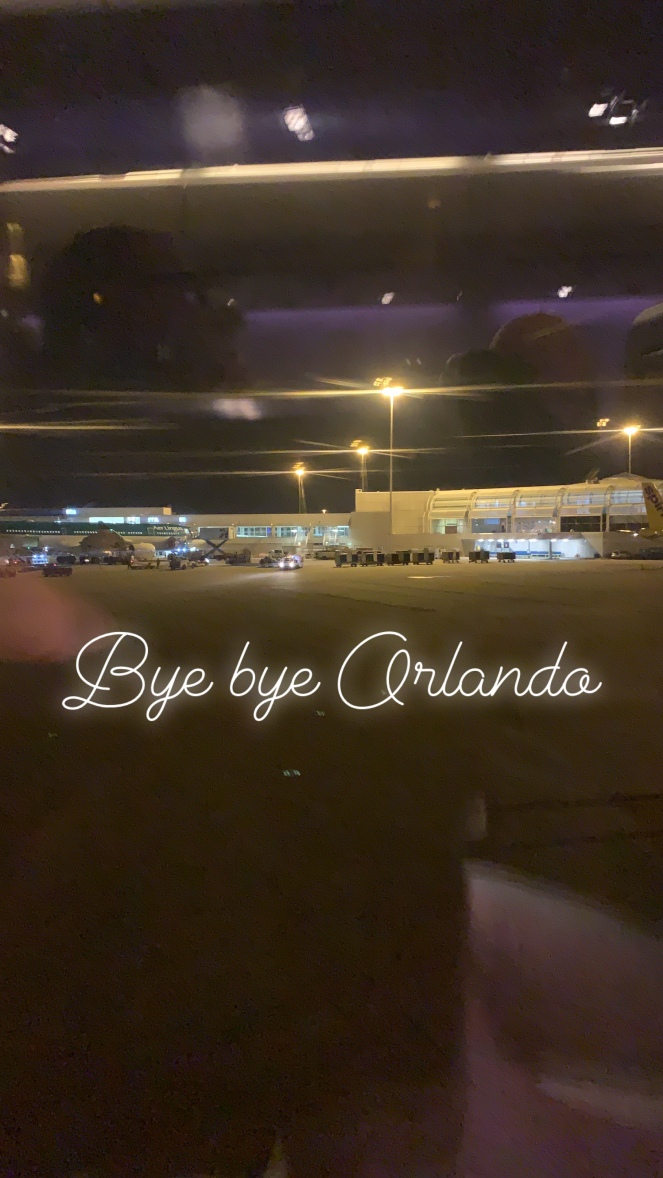 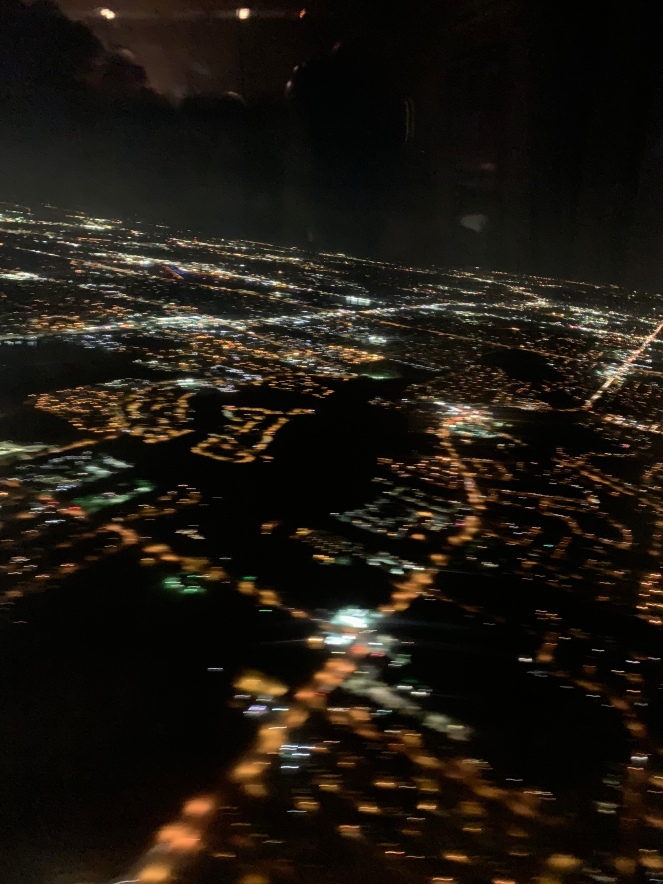 Crew woke us up about 45 minutes before landing to give us all the info about their charity and rules regarding bringing food into the UK 🙄 sure helpful thanks ha! They clearly don’t know not to wake a sleeping Robyn 😂😂 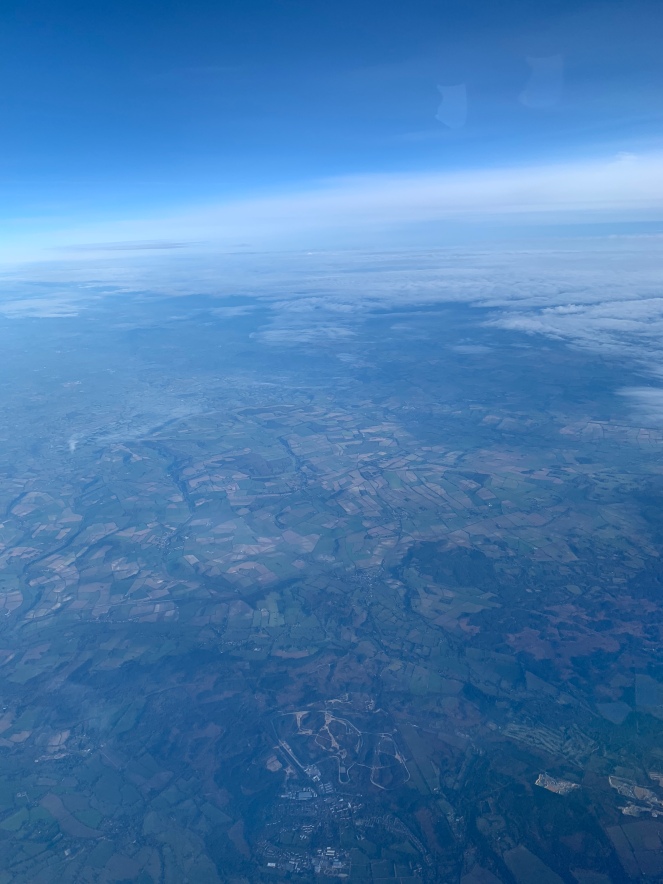 We were kept in a holding pattern for a little bit and landed shortly after 9am.

Off the plane into a very chilly London Gatwick ❄️ I’m not meant for cold weather! We grabbed the bags in super quick time – we were off, through security and bags in hand within 40 minutes (would have been in 20 minutes but the last case took a while) and then made our way outside to meet Anne who was picking us up. Thanks Anne! Back to their house for Simon to work for a few hours, and me to cuddle the dog 😍

And with that, our trip is over. We’ve had the most amazing time ever!! I think it’s safe to say this has been our best trip to date.

Thanks to everyone who’s followed along with our trip. This has been the first time in a long time that I’ve blogged and I even wrote some of while we were travelling (hats off to those who blog every day, it’s hard work!!)