We had been looking forward to this day for the longest time ever 😍😍 We were spending the day with Liz, Nicole, Sherri, Brandon and Billy (all who are lucky enough to call Florida their home).

The alarm went off at 6:15. Omg! It was HARD to get up this morning. We had to be there for 7am for the ray feeding we had booked.

We met everyone in reception, the girls had just arrived ahead of us so were at the check in desk already starting. We went to walk over to meet them and a really rude woman doing bag check told me off for going over 😒 she hadn’t realised we were with them which is fine but it was her manner. When I went over the girls asked if she was rude to us as she’d just been really rude to them too 😮 that’s not the experience you expect. And not to leave the boys out, she was really rude to them too when they came in. This was not the start I expected I have to say. I didn’t catch her name but we told the guy checking us in and he said nothing at all 😑

Simon and I were booked for the Ray feeding so we had to wait just outside reception and told the guide would meet us at 7:15. Shortly after 7:30 he arrived to take us down (I could have had an extra half hour in bed!).

We were given the brief that we would be kneeling up in waist high water at first while they brought the big rays around for us to touch but they would be doing the feeding. We would then be heading deeper to feed the smaller rays.

What happened was they took us into 2 inch deep water and had us kneel on sand/uneven rocks so that our knees were killing (this was the same for everyone as no one could keep still). The rays weren’t interested in the food (they later said they didn’t particularly like the food they were feeding today) and none came anywhere near us, there was no feeding and no touching.

We then made our way into the deeper water, where we stood in lines and were given some fish ready to feed. I’m not sure if it was where we were stood or what but the rays didn’t come near us, most of the fish I was holding ended up feeding the bigger fish instead. The guide came around a few times to give everyone more fish (even though we all still had some) but he left me and Simon out, we didn’t get anymore apart from the first time. Everyone had finished and were feeding the fish now while I still had fish in my hand trying to get a ray to come anywhere near me. The fish food however was clearly what the rays wanted as they were going nuts for that on the bottom of the ‘seabed’.

It was then time to get out. I had maybe fed 2 or 3 fish to rays. That was my ‘ray feeding’ experience 😒 The day before I had 3 trays feeding the rays at seaworld for $8. I know which was better! And cheaper…

Thankfully that was the end of any bad experiences in discovery cove. It’s a shame there were any to begin with but never mind. The rest of the day was amazing.

We went to grab some breakfast as we were STARVING. The lines were really long but we were soon loading up our plates.

We found the guys right outside, they’d grabbed some awesome loungers right by the lazy river. 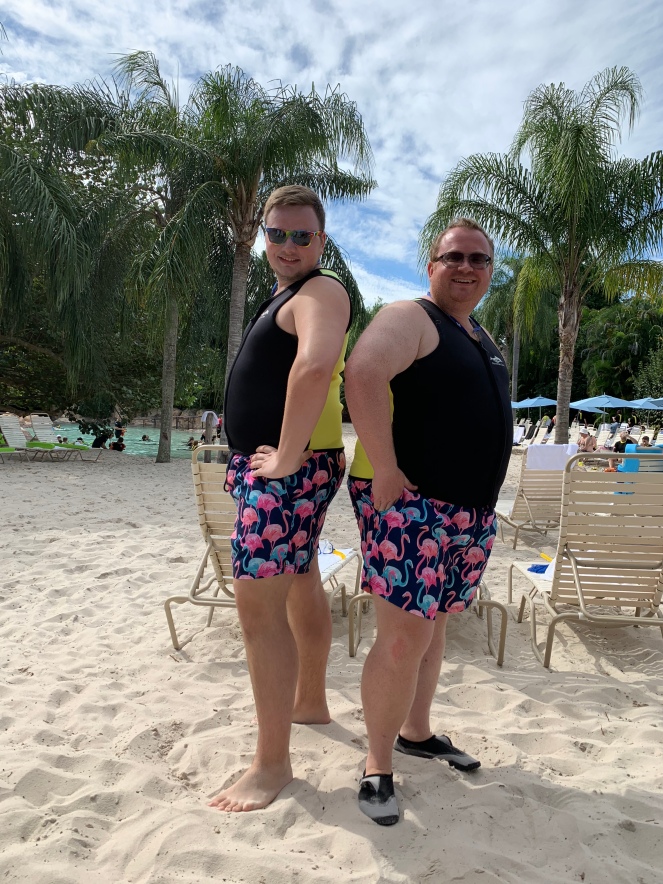 We sat for a little bit before it was time for the others swim with the dolphins. Simon was fast asleep by 10:15 🙄 I went along to the dolphin swim to take pictures rather than the $229 photo package price (yikes!). I clocked a girl carrying out a ‘Will you marry me’ float so I was watching for that while taking pictures – they did it right at the end, it was so sweet!

After I went to find Simon who had just woken up, nice 45 min nap for him then 🙄😆 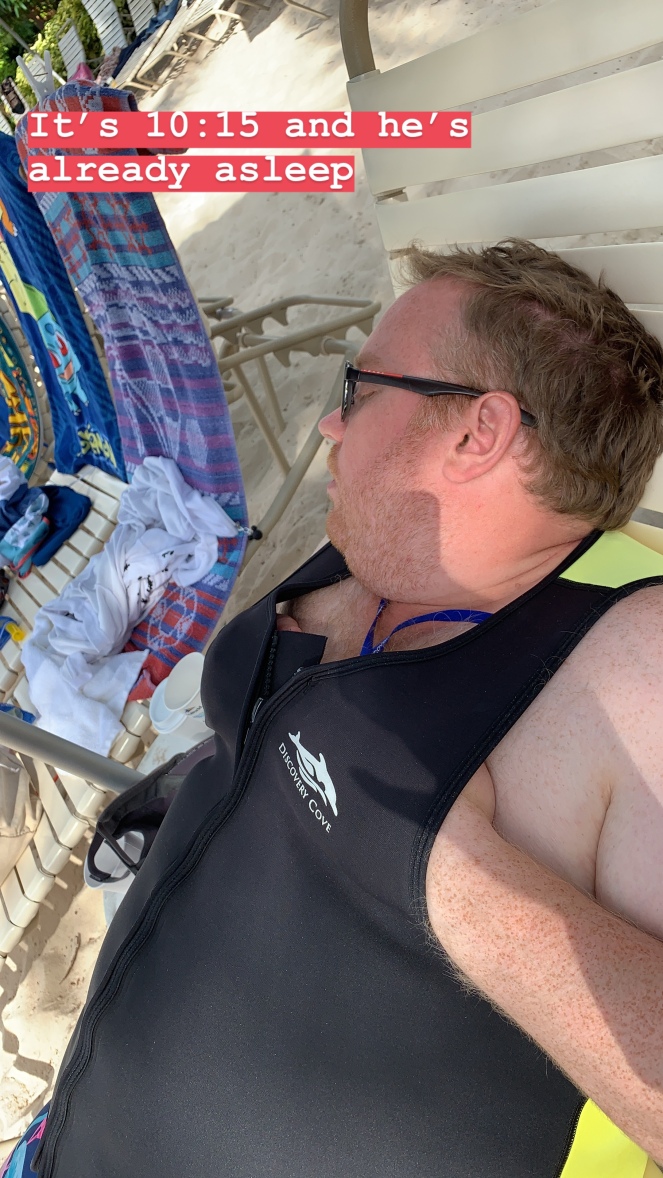 The rest of the day went like this… lazy river, eat, reef, eat, otters, eat.

Lunch wasn’t too bad, but we pretty much all skipped the frozen cocktails, they weren’t great.

Last thing of the day was the aviary 😍 I think this was my favourite part of the day. So many birds came to hang out on my arms and munch the food. It was amazing! Poor Billy had a little pooping incident… it was involving a bird, he didn’t have a dodgy stomach or anything 😂 the bird might have though! It happens in there with hundreds of birds around flying over or sitting up in the trees. I was expecting it to happen to me but I escaped today. 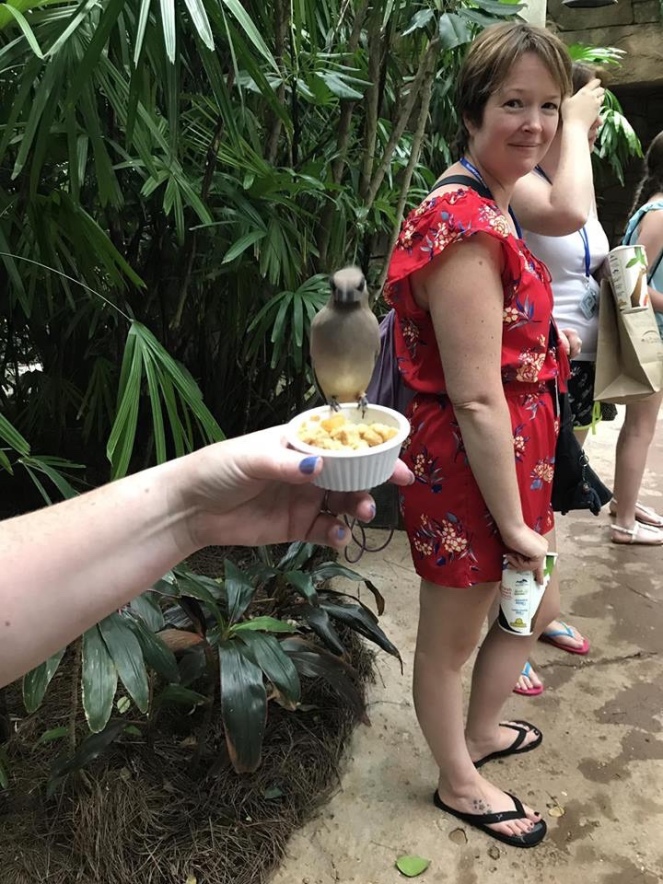 There was a cold front in so we didn’t spend much time lazing on the loungers as it was a little too chilly for that. And we only did the reef for a short time as the water is so cold. The weather didn’t stop us having fun though! We were one of the last groups to leave at about 6pm.

We all said goodbye outside and made our way back, we are doing brunch tomorrow at Art Smiths so we’d see each other again soon.

We drove back to the GF and I hopped in the shower. I waited till we were back to shower and wash my hair as it takes a while #curlygirlproblems

We were soon making our way over to Bay Lake Tower to meet up with Jerrad, Payton and Tori 😍

My fave server was working tonight too so I was happy 😍😍 the lovely Ryan! We were absolutely STARVING so ordered some food right away, I got the margarita flatbread while Simon went for the tuna poke bowl. They were good!

Everyone arrived soon after and we went outside to watch the fireworks. I realised then that this would be the last time seeing them for this trip 😢 and also that we hadn’t seen them from inside the park. The only bad side for the Halloween and Christmas parties is that the non party nights get crazy in the magic kingdom. I just don’t wanna get into the throes of people. There might have been a few tears at the end when Tink was flying. Just love Happily Ever After!

Another of our good friends Lon arrived too and we all hung out chatting for a while together, talking all things Disney before heading back at 11:30pm. I have no idea how I made it to that time after having no sleep and a busy day swimming but somehow I did! I was kinda delirious when we got back though and I had to go straight to bed 🙈 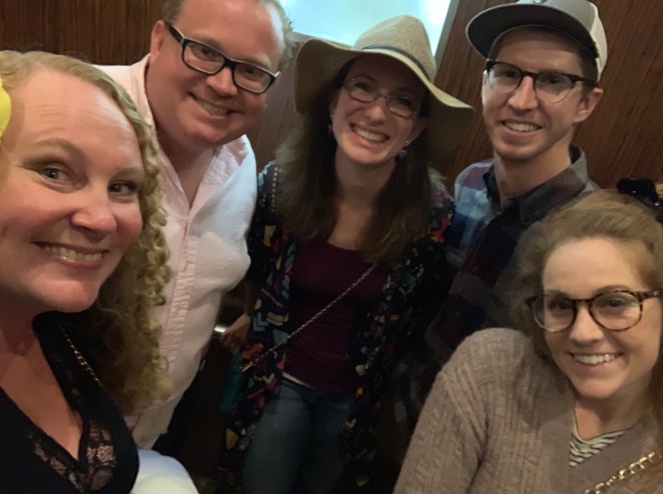