The Magic Kingdom and Mickey’s not so scary Halloween party.

Today’s wake up went similar to yesterday’s 😒 if Simon doesn’t make it home alive and is found suffocated you’ll all know why! The snoring 🤦🏼‍♀️ OMG the snoring 🤦🏼‍♀️

Gave up trying to sleep and made a lot of noise, turned on the lights and opened the curtains. If I’m not sleeping sunshine then neither are you! I was nice yesterday letting you sleep, today I asked you to get up so I could sleep and you bit my head off 🙄

Up and ready to go about 10am, we stopped by Gasperilla Grill for a bagel for Simon. We were heading for the 10:40 Trolley show followed by the 11:30 Move it, Shake it street party. 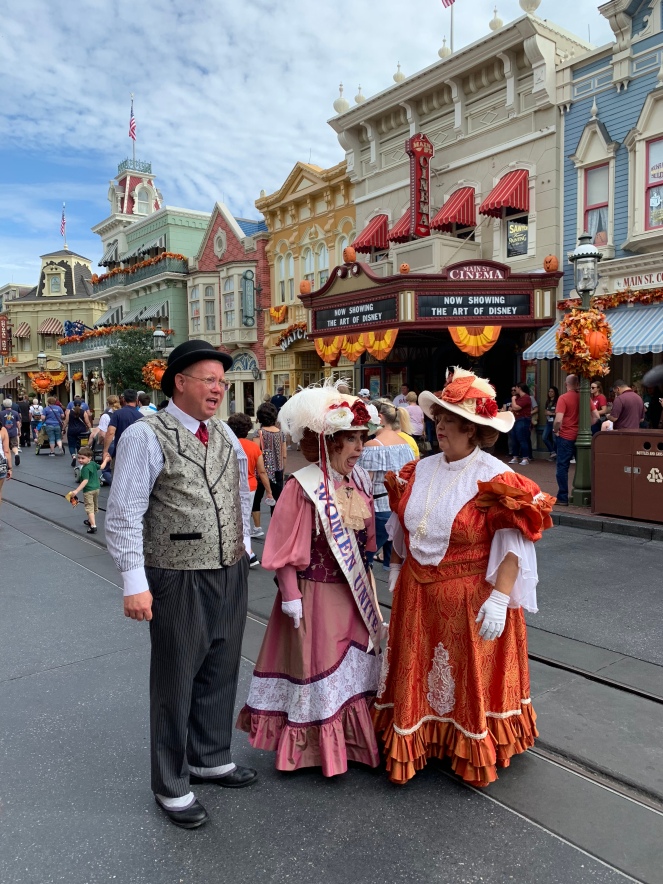 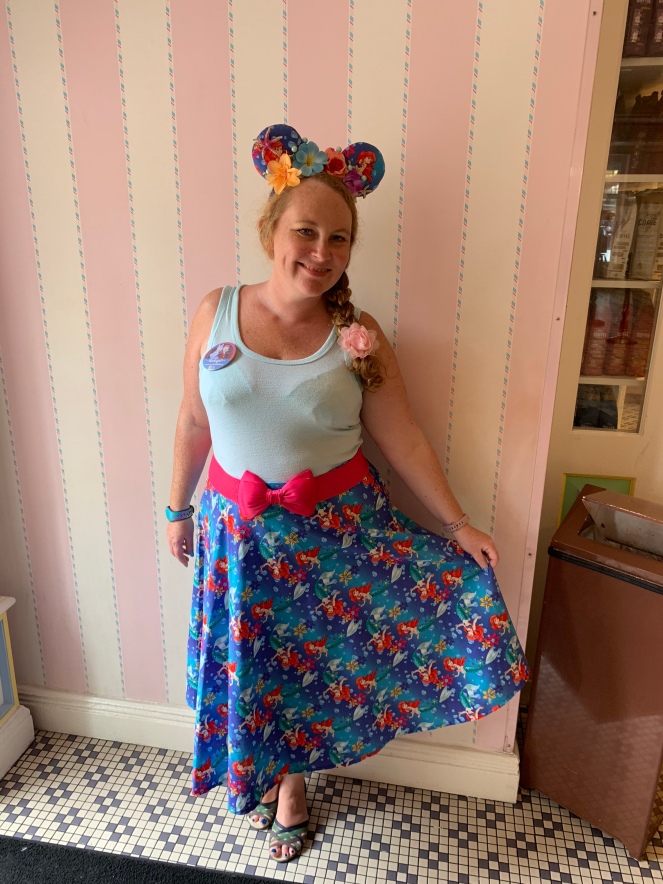 We were meeting up with Becky and family again for the Move it Shake it, though I did notice Adnan didn’t do much dancing – even though he’s having withdrawals from having no gym he missed the opportunity for some exercise… 🤔😆

We found the lovely Chrissy so moved it and shook it near her 😍 and she made a big fuss of Becky’s girls which was great.

With Move it Shake it heading back down Main Street, we left Becky and family to head for their fastpasses and lunch and we headed round the liberty square.

Our friend Jan (from our cruise last week) was also in MK today so we arranged to meet up near Haunted Mansion. Jan had a splash mountain FP booked, so we made our way to Splash to join Jan and use up some of our free fastpasses!

We stopped on the way for some photos.

Splash is one of our favourite rides in the Magic Kingdom. I love that it lasts so long, really feels like you get your money’s worth 😂 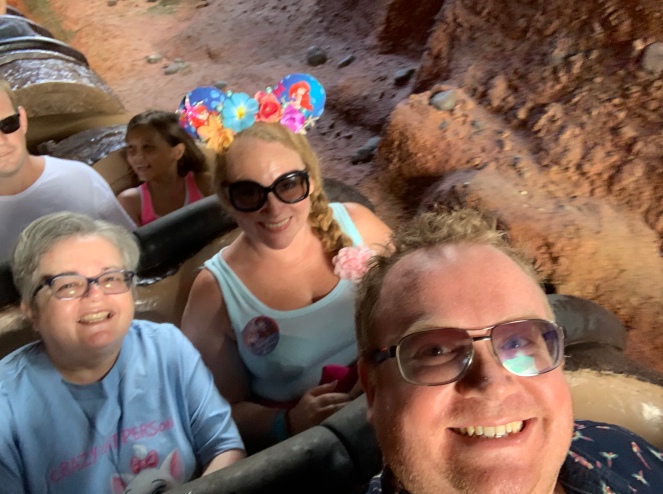 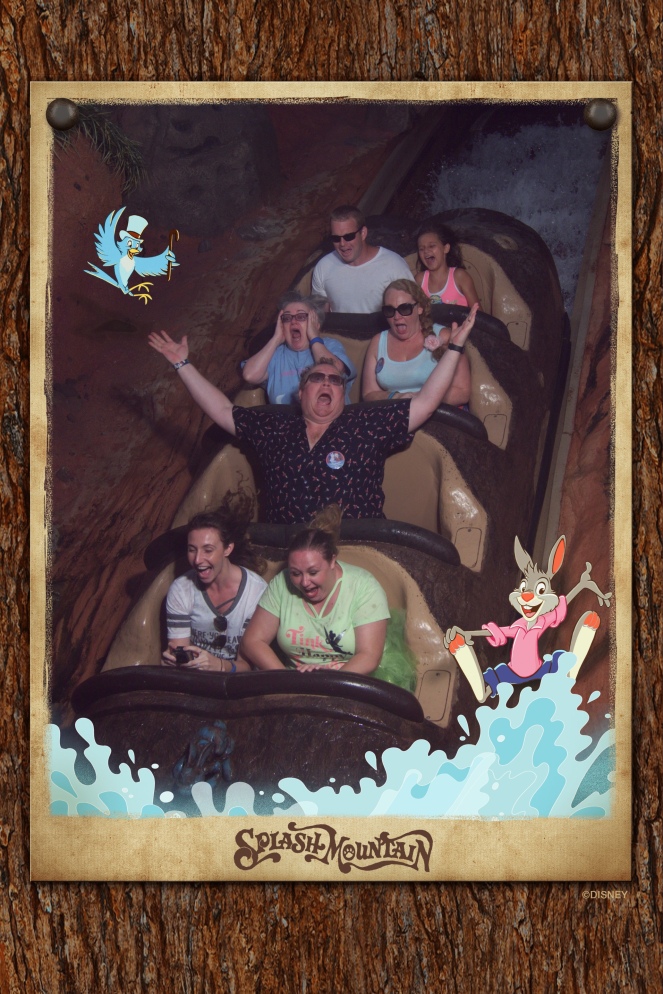 We then did some mobile ordering on the app for Columbia harbor house lunch. I made the rookie error of getting a kids chicken nuggets when I’d not had breakfast 🤦🏼‍♀️ Jan had the biggest, most expensive thing on the menu though as she was on the dining plan so she came to my rescue and shared some of hers with me (and she still couldn’t eat it all after that). Simon had his usual tuna sandwich.

We made plans for tomorrow and then said goodbye, we were going to try to meet up with Mary Poppins in Epcot but we missed it 🤦🏼‍♀️ so instead we hung about on Main Street and watched the parade. 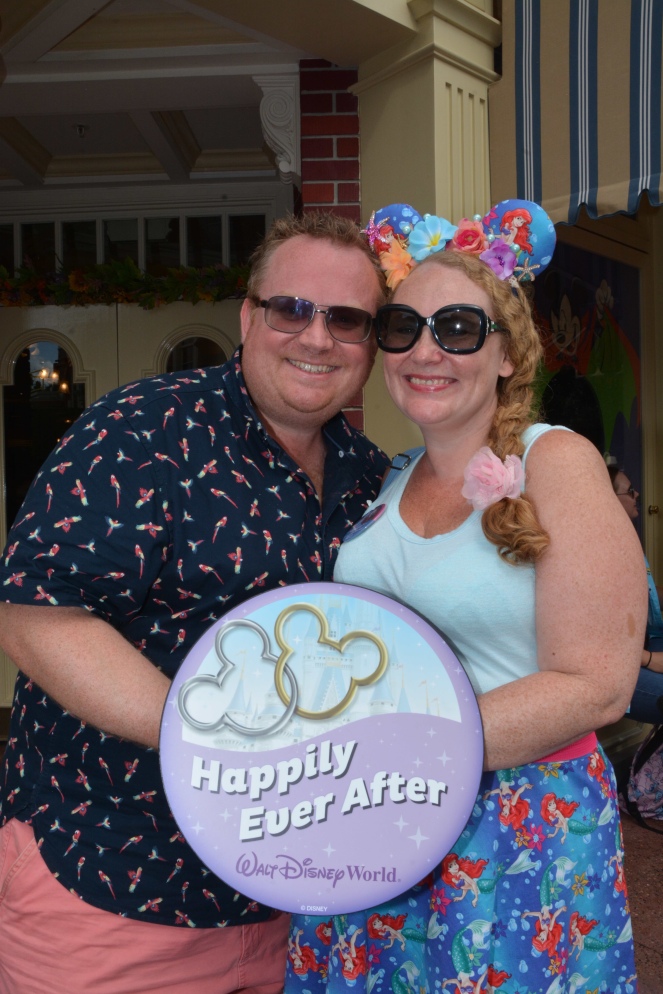 We hopped on the boat back to the Grand Floridian after and I had a nap – I really cannot deal with not sleeping, especially when I’m getting over tonsillitis still. You know those people who survive on a few hours of sleep a night? Yeah me neither.

When my alarm went I opened one eye and wondered how much longer I could set my alarm for to feel a bit more human. Simon was hungry so he ended up driving north of the magic kingdom to Toasted of Windermere – I suggested the pool bar but he was having none of it. Food was lush though so I don’t mind. We need to talk about their truffle fries. Lush! 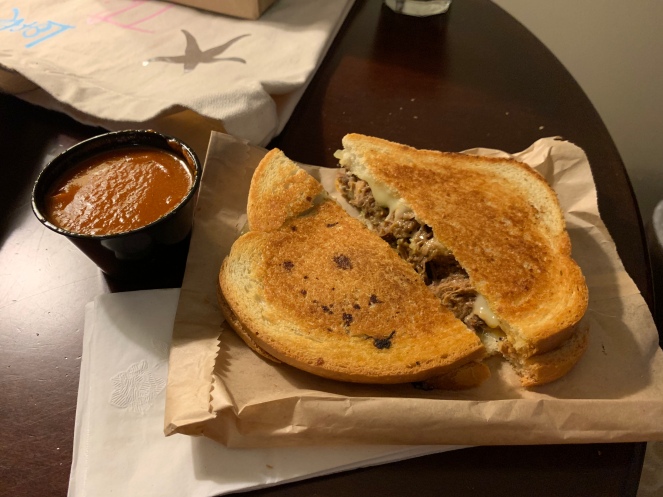 It did mean we ended up arriving to the Halloween party a little later than planned at about 7:30. We stopped in the GF lobby for some pictures on the way. 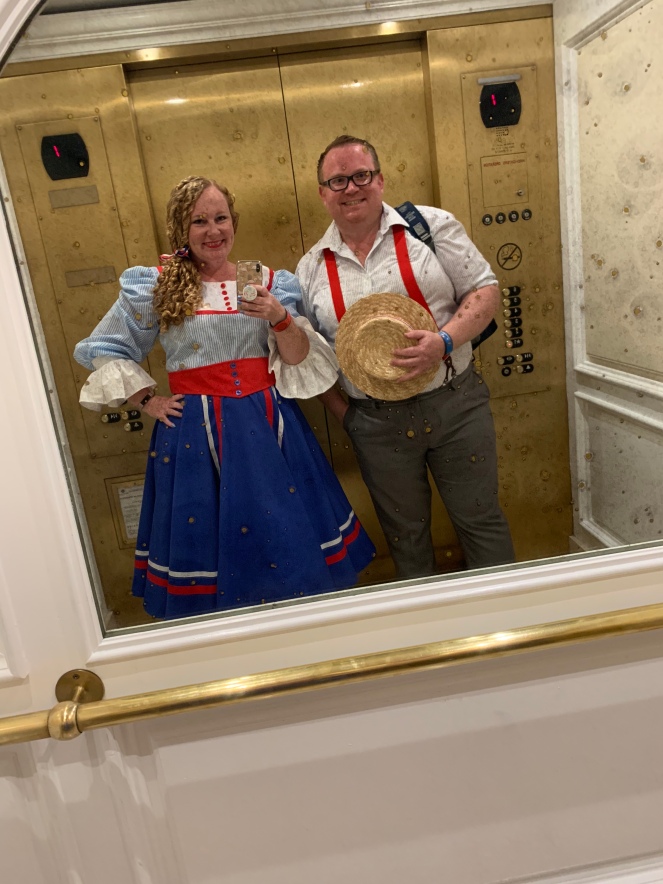 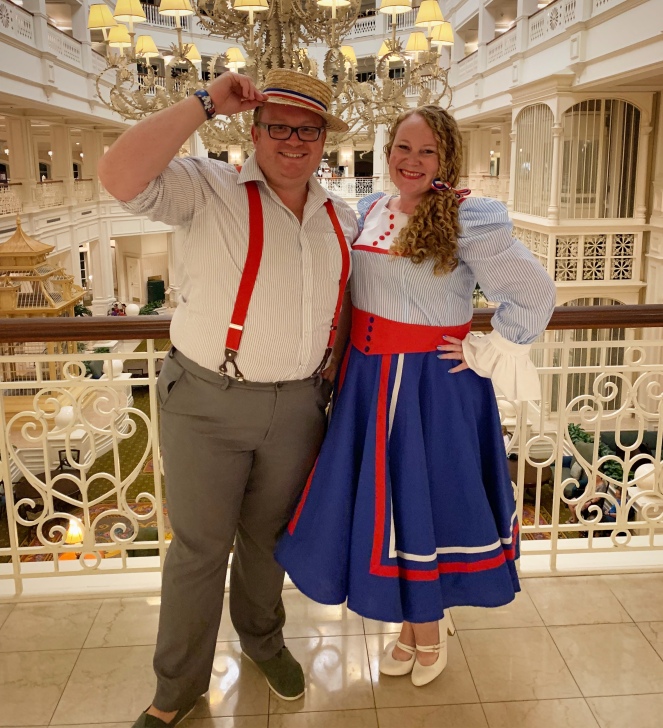 First stop tonight was the haunted mansion to watch some Madame Carlotta and Madame Renata (with a bit of Broom thrown in). They were SO awesome. I’m a little bit in love with Renata! She was amazing. She sang the Trolley song to us 😍 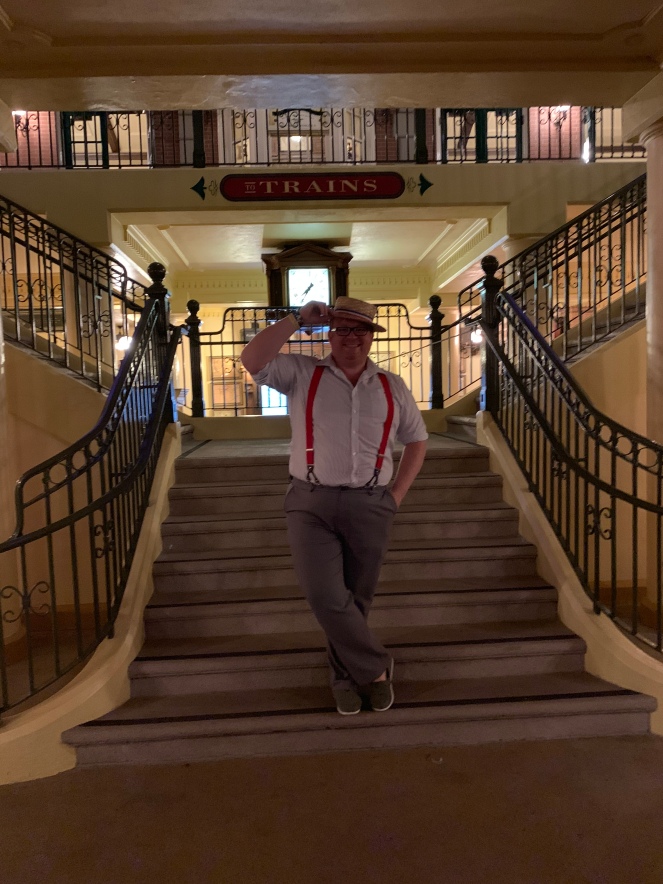 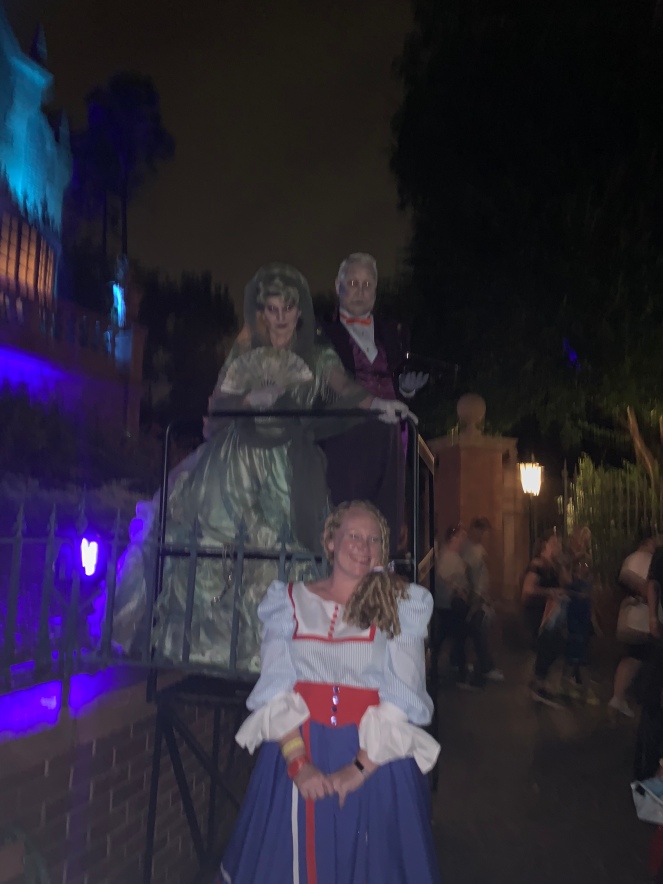 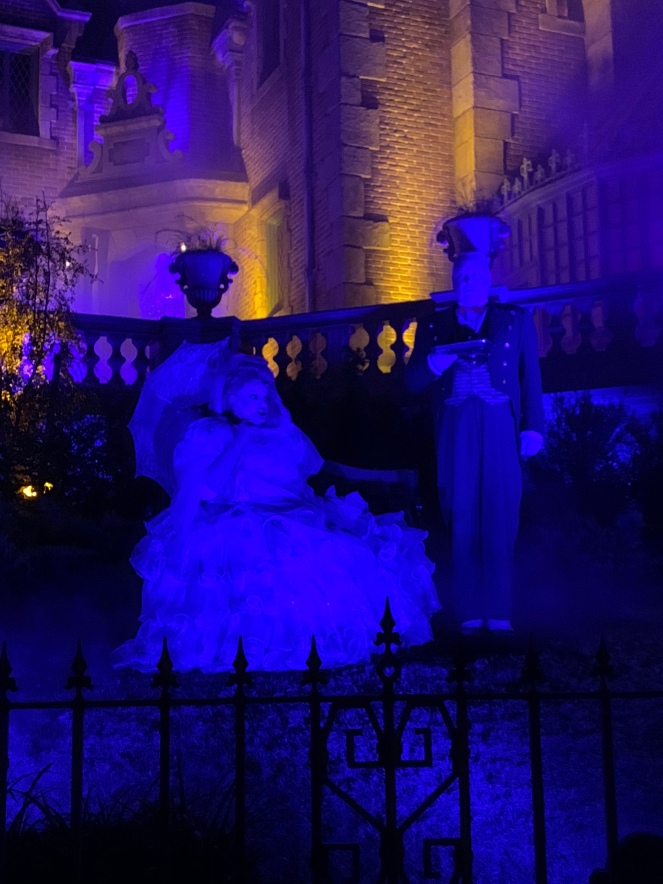 After, we made our way along the parade route but couldn’t find anywhere to watch from, it was super crowded. Eventually we found a huge gap right in front of the barber shop so watched from right there. The parade is awesome but I did notice a few things they’ve got rid of, like the grave keeper and his dog. It has been 2 years since we last saw it though.

When we were trying to find a spot to watch from a lovely CM called Daniel stopped us and asked if we were the Watson’s – he follows our travels! It was so lovely to meet you and thanks for saying hello, totally made our night!

Parade finished we ran up through the shop and got a spot in the grassy area in front of Caseys ready for the fireworks. We arranged to meet Rachel there too, we watched the fireworks together and then made a dash to meet Abu, sadly he wasn’t out right now so instead we met Genie and Jasmine. Off we went to get another spot for the parade – cause you can’t just watch it once, stopping quickly for our first stop of the day at a trick or treat station.

There was loads room for the parade in Frontierland so we stood for about 20 minutes before it started and had barely anyone around us when it came by. Awesome! Top tip if you can make it to the second parade showing. Harder with little ones fighting to stay awake though. 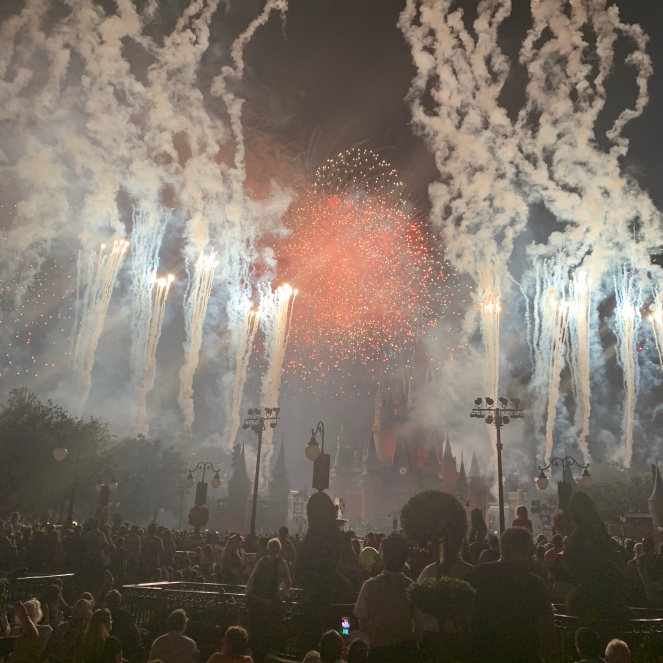 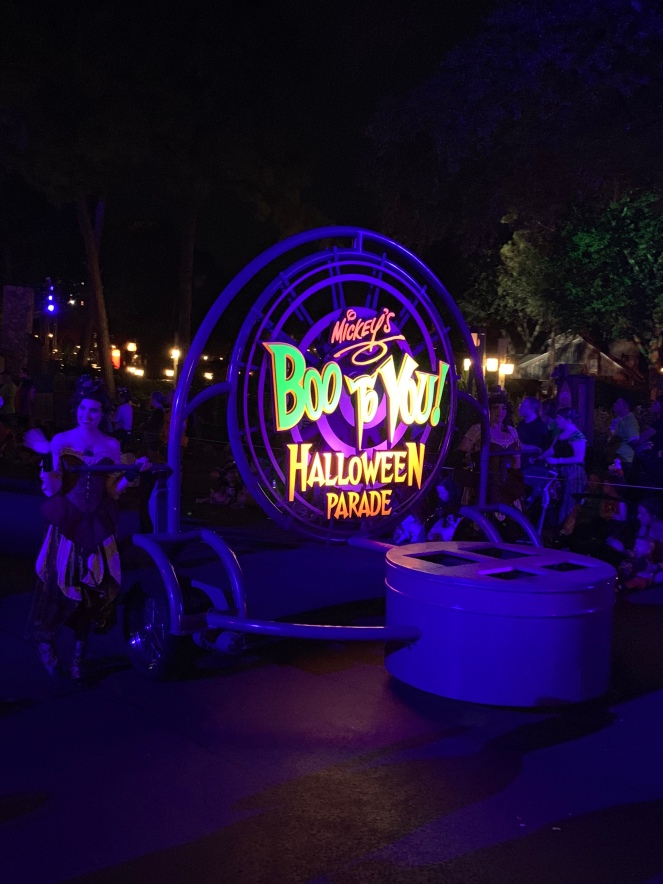 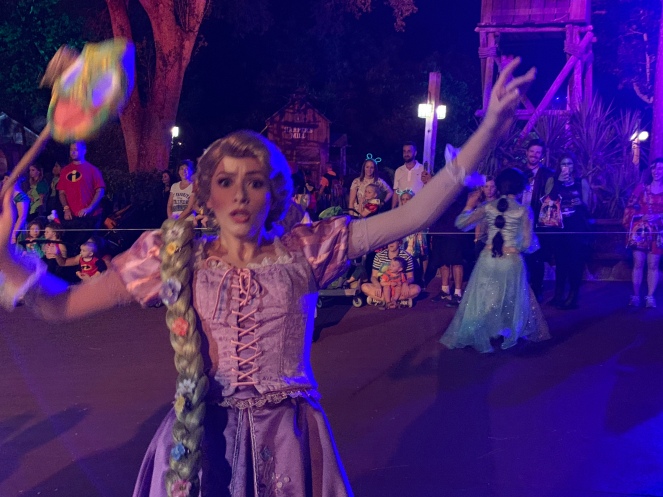 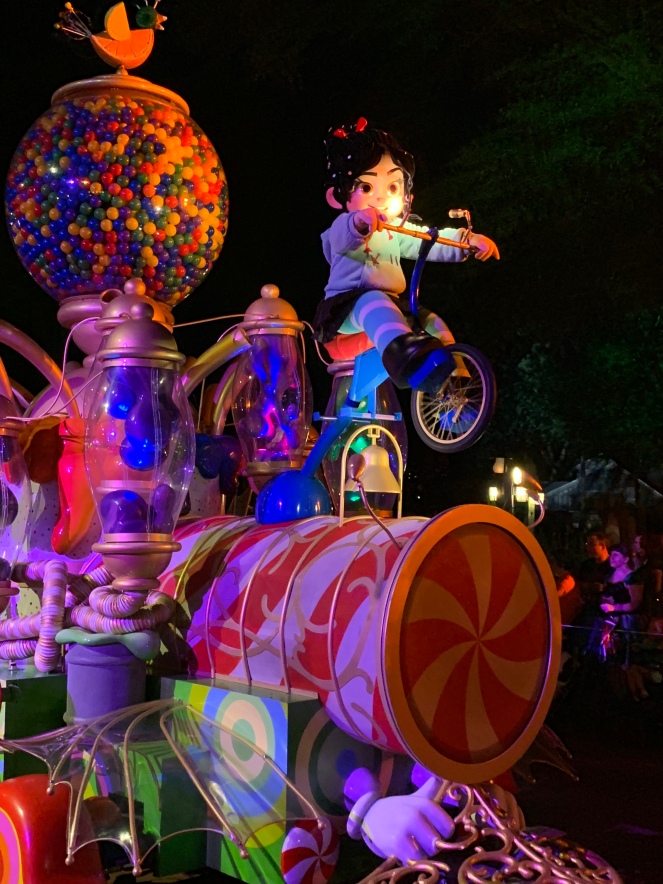 After we said goodbye to Rachel who was off out for the evening. We however wanted to make sure we killed our feet completely first and headed in the direction of some more trick or treating, I called it quits about 11:45 and went to watch the last Hocus Pocus show at the castle. Wow and I thought the last show would be quiet! Heck no. It was crazy busy. I watched from the side under a turret. Simon found me about 5 minutes into it with bags full of candy.

The show was fabulous, next time I’d go earlier though and get a better view.

Once it was over we shuffled (that’s all our feet could manage) over to the purple wall for some pics before we left. We ended up being the last ones here and closed up the area 🙈

Simon stopped in Starbucks along Main Street on the way out while I got in line for yet another photo. 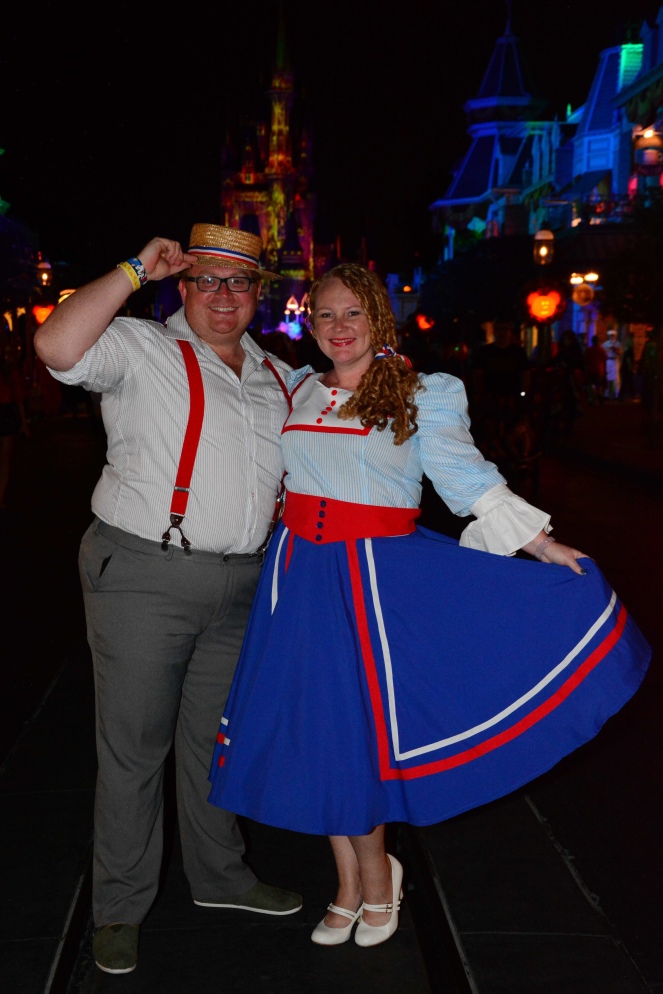 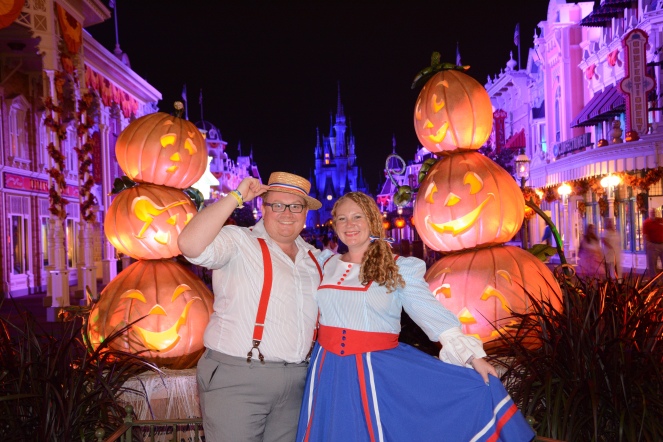 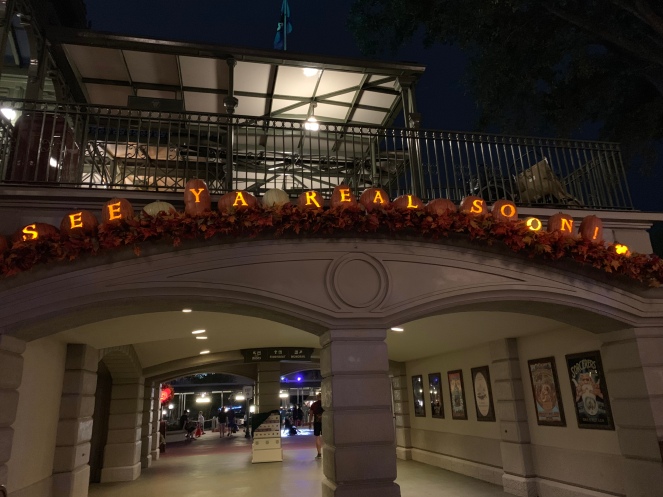 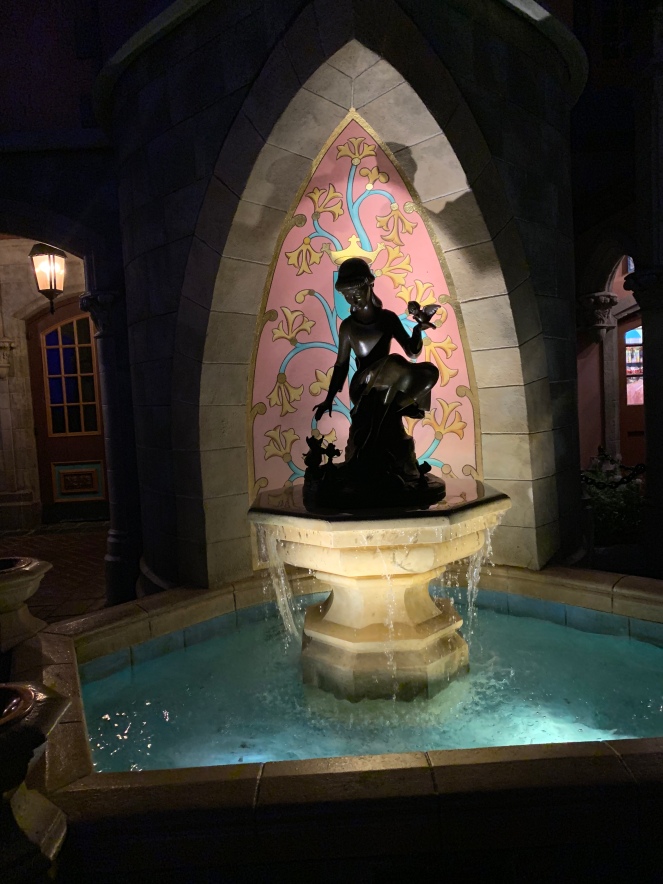 We hopped on the boat back to the Grand Floridian and did the slowest walk ever back to our room. Being in heels all evening had not been a good idea 🙈 I did swap them out for a little bit during the fireworks and second parade but they’d gone back on for more photos – not my brightest idea 😂🙈

In bed finally at 2am 😱 it had been a long but amazing day!

Last couple of pics in the empty lobby on the way up to our room.

Tomorrow, Disney springs for lunch and then Epcot in the afternoon