The day has finally arrived! This was the day we’d been waiting for! Castaway Cay day! Basically this is the day it’s all about, for anyone who’s been on a Disney cruise that stops here, you know what I’m talking about, if you’ve not been on a cruise yet, this is the reason you should. Disney’s own private island of paradise.

We arranged for our parents to come to our room for 9:30 (Anne and Cliff were running on Watson time so we didn’t leave till around 10). Simon grabbed some breakfast from the lounge but I wasn’t hungry so I skipped it.

Yesterday our lovely host Tom had left us a super cute 3D model of our cabana that we had booked for today – with all of the instructions and wristbands. So we donned the bands and made our way off the ship. Rather fetching neon green colour… not normally my colour but I guess they just want us to stand out 😉 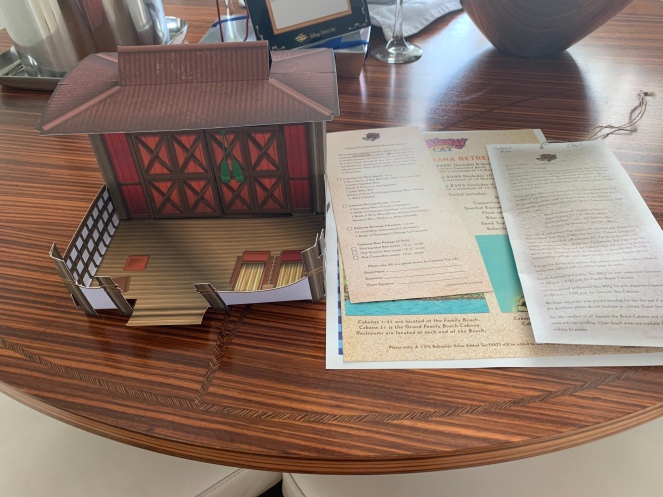 Now whenever I’ve read about hiring a cabana, its mentioned about little golf carts that meet you from the ship and take you right there. There were no carts 😑 it’s like the neon green wasn’t working in our favour. I went asked someone who said we had to make our own way there, not ideal with my mum who didn’t bring her wheelchair (as I told her that she wouldn’t need it). We hobbled over to the first tram stop and I got Simon to ask again there as I was sure this wasn’t right. The girl Simon asked right away called and got a golf buggy to take us all the way there. Now that’s more like it! I knew I hadn’t dreamt it. 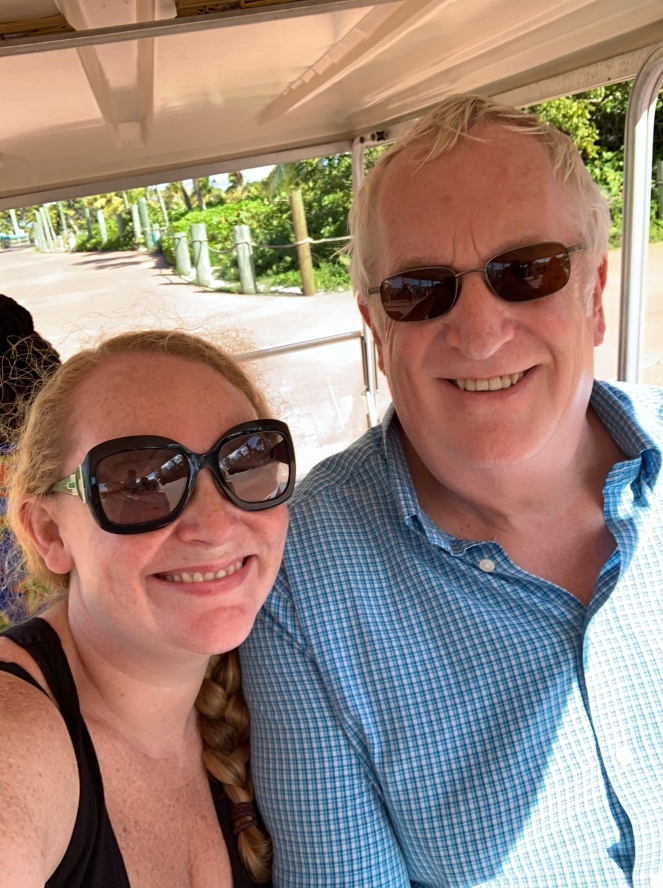 We hopped off at our Cabana and quickly took some pictures before lotioning up and running into the sea with our floats. It was so hot we needed to cool off. Amazingly we even had our own shower outside our cabana so we didn’t traipse a load of sand in everywhere. We had snacks, a fruit bowl, plenty of soft drinks in the fridge – it really had everything we needed for the day! In the past I’ve had friends ask if we would like to share a cabana but I’ve never really seen the point in them… I take it allllll back. This is how I wanna do castaway cay every time! 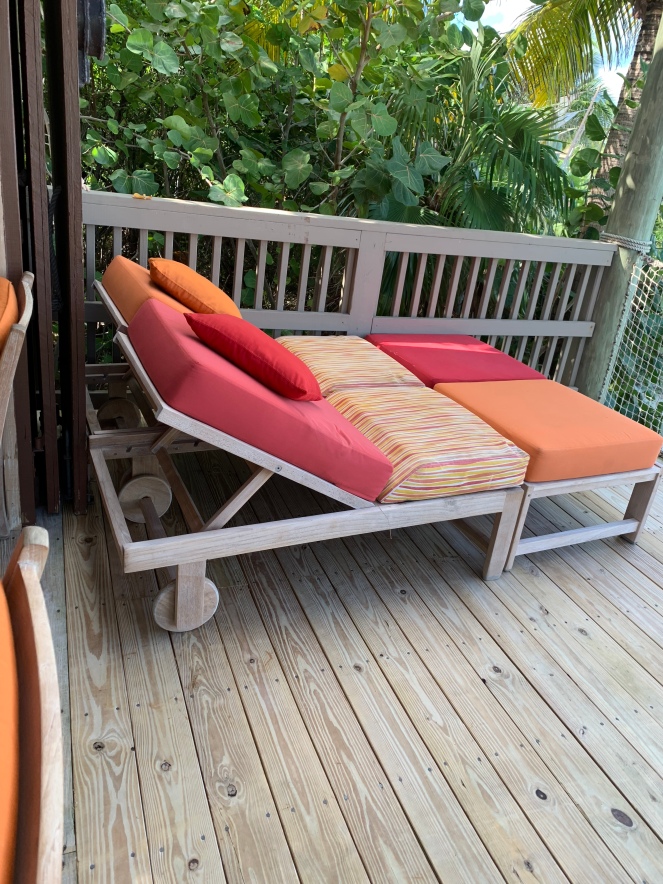 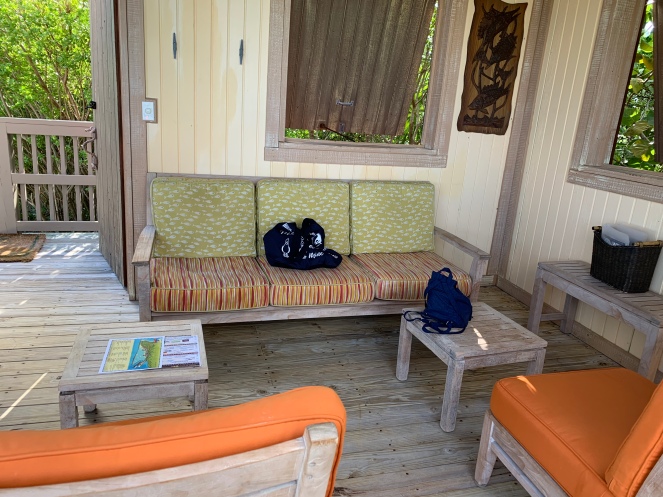 After our little cool off in the sea we came back up for some shelter from the sun and a sun cream top up. We decided as it was now 11am we could get some cocktails (cocktails before would be wrong obviously but after 11 was another matter), so we pressed our little buzzer and cabana man came to take our drinks orders. He was back shortly after with a cocktail each. I had a strawberry frozen thing. It was goooood. In fact it was so good it was gone before I knew it. The guys cracked open the bubbly after too (which our friend Jen had sent to our room before boarding). I skipped some for now and it was a good job I did, 12pm came and we decided we needed food – most of us barely having had any breakfast. I got up to press the cabana button and woooooosh, I didn’t realise how strong that drink was 😵 I guess an American poured cocktail on a pretty empty stomach wasn’t such a good idea… I staggered to the golf buggy and went straight to the buffet. I have to say I always find the food on Castaway Cay meh. It’s a lot of meat. Burgers, ribs, steak, hot dogs etc. The only chicken was thighs and cooked in lemon – neither of which I’m particularly a fan of. Also the salads they have do nothing for me. So I ate a lot of chicken thighs followed by a large ice cream. I’m not sure that exactly soaked up the alcohol but it seemed to help.

Back at the cabana Simon chopped up loads of the fruit we had (from the fruit bowl in the fridge and Cliff smuggled some fruit back from the buffet). Simon turned his back for a second and before he knew it there were a couple of birds feasting away on the banana 🙈 we moved the bits they had been eating to the windowsill and chopped up some more – we didn’t fancy half eaten by bird fruit. Go figure. 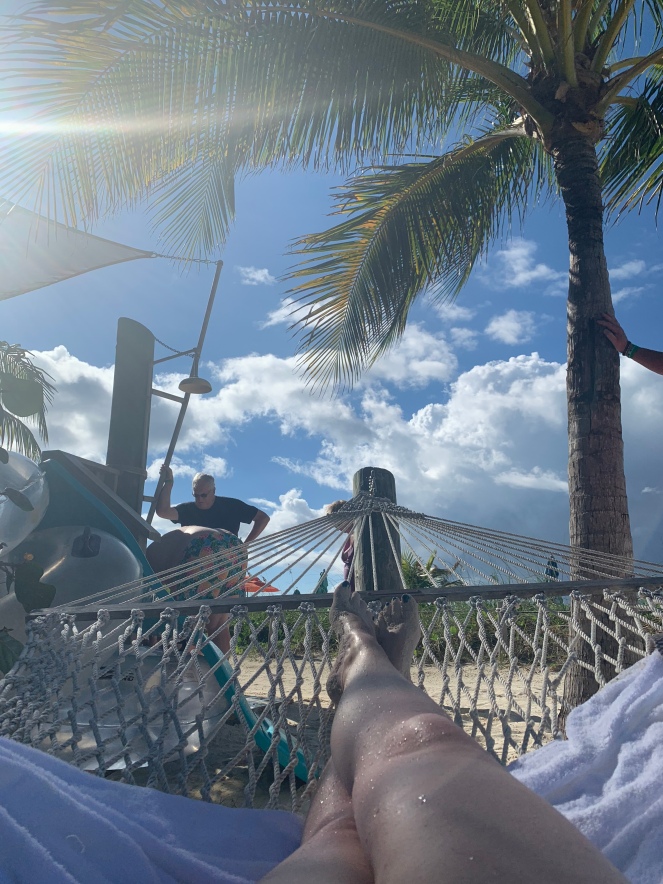 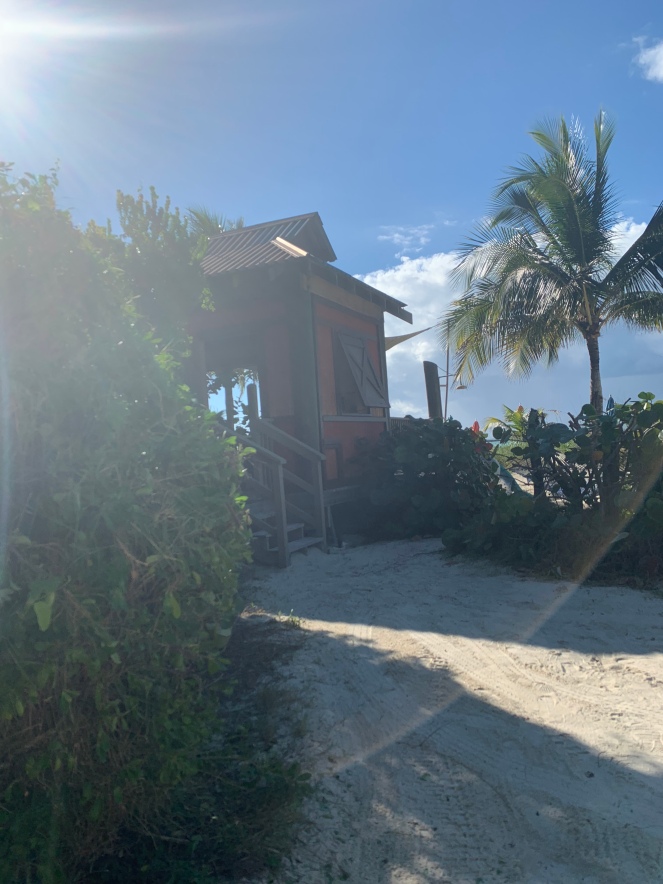 The rest of the day went like this… nap, sun cream, sea, repeat. If this is heaven, sign me up.

In the sea we saw a big ray and loads of tiny fish, was very cool! We put some of the chairs in the water so we could sit with our legs in the sea, all the tiny fish were coming right up to us and swimming around us. I’m a little nervous of fish (childhood falling into water issue) but I was a big brave girl and didn’t freak out lol

Eventually it came time to leave – we were not ready for this 😢 we’d had the best day. Hiring a Cabana was the best money we’ve ever spent! I’d do it again in a heartbeat. And honestly between the 6 of us it wasn’t too much like crazy money. It was cheaper than a lot of the excursions were for 6 people. 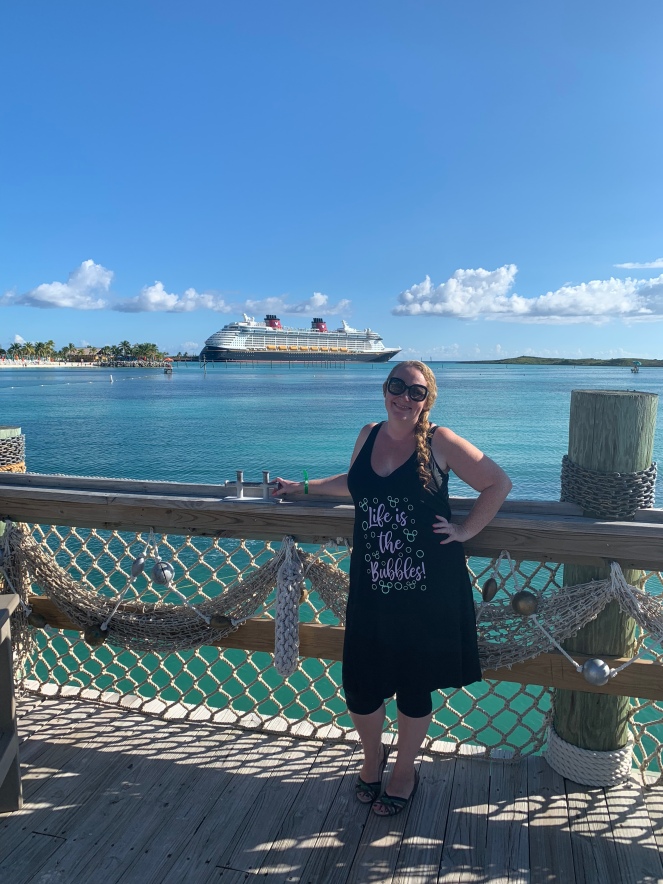 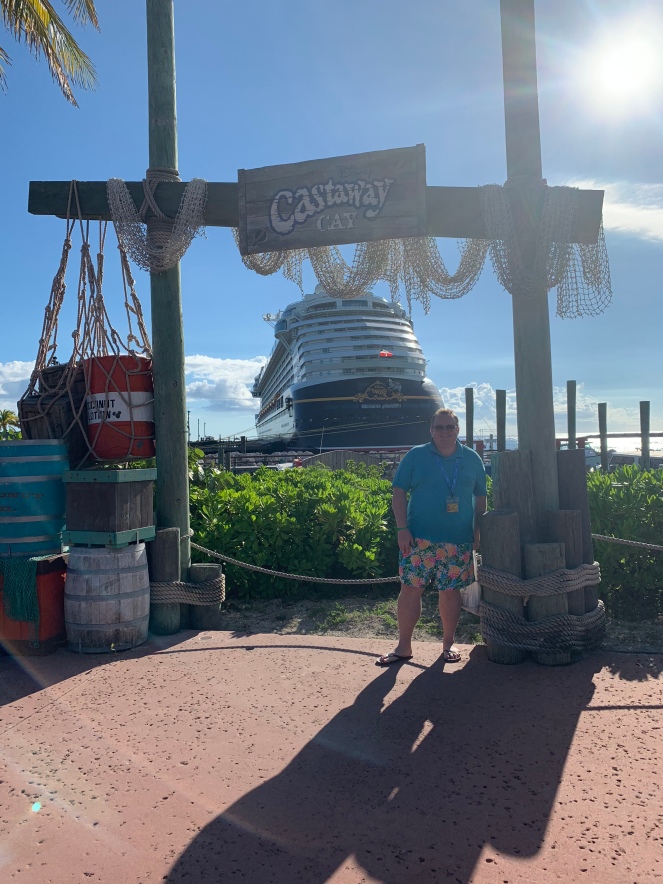 We called the man with the golf buggy but he only had space for 5 so we got him to take us half the way and then go back for our parents and take them all the way to ship. This worked well as it meant we could pop to the family beach and take a few pictures before hopping on the tram to the ship, and my mum wouldn’t have to walk too far.

Simon hopped straight in the shower while I did some of the packing (I’m chief packer in our house).

Not sure where I’m gonna put all the free toiletries 🤔

I needed to wash my hair and I knew it was going to be tight so we decided to head to tonight’s show, Believe first. I threw on a swim dress and we made our way to the show at 6pm. We stopped by the lounge for a couple of drinks to take with us, I went for a Diet Coke after my morning escapade. Simon got a fizz cocktail. It was tonight I had my only ‘iffy’ experience with any Cast Members on board. One of the waiters in the theatre walked past and knocked my drink clean out of the drinks holder, it went everywhere – all over me. When I managed to catch him (he didn’t stop at the time) he told me it was dangerous to put drinks in the end holder where people walk along the aisle. 😑 no real apology and certainly no offer to replace my drink (he didn’t know I had it free from the lounge). It was just annoying. Of course it had been an accident – I was however soaked through and freezing from the ice, I’d just have liked an apology. It’s the only time all cruise we had less than amazing service which is why it stood out.

The show was amazing of course. I might have let a tear or 2 out. The show is about a girl and her dad, she believes in magic but he doesn’t, it’s all about his journey to discover what magic really is. It’s a beautiful message 💕💕

As they took their final bow we made a dash for the lift. I had 45 minutes before dinner to wash my hair. I ran a bath (needed one last jacuzzi tub!) and Simon grabbed some nibbles from the lounge… he might have been feeding me Brie on crackers while I was still in the bath 🤫 I watched a bit of Ant-Man while I was washing my hair – I could get used to this way too easily!

Simon came back from the lounge with plate number 2 of cheese and said Ariel was in there – you’ve never seen this girl move so fast. I leapt out of the bath and started to get ready, I sent Simon back to find out how long she would be there but sadly she was already gone 😢 rushing for no reason 😭 well I guess there was a reason, we did have dinner to get to!

Our last evening meal was in Animators palate and we were in for a special treat. When we sat down we had some drawing on each place setting, we had to draw a person and it would be used in a cartoon near the end of our dinner. Luckily some of our party had done this before so they coached us on what we had to do. It was really fun! 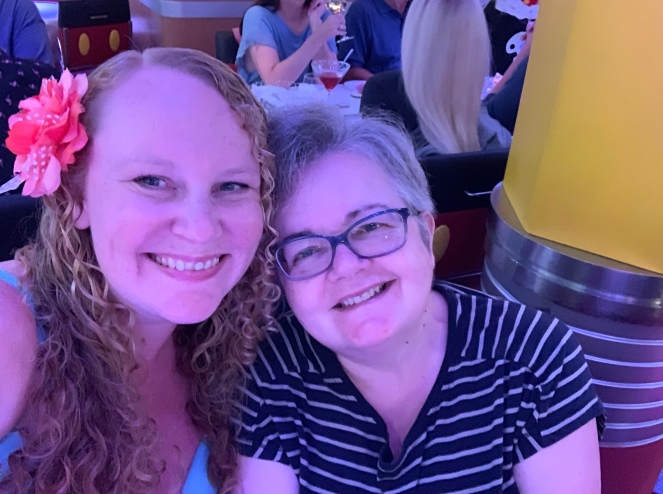 Tonight’s curry was biriyani, I’m not a fan so I skipped curry. I had the chicken satay to start (meh) and chicken schnitzel which was yummy (but why did they put an anchovy on the top?!). Dessert was creme brûlée 😍 Javed brought me out 3, I’m not sure how much of a guts he thinks I am… or maybe after a week he does 🤔😆 I was a good girl though and shared them with the table 😉 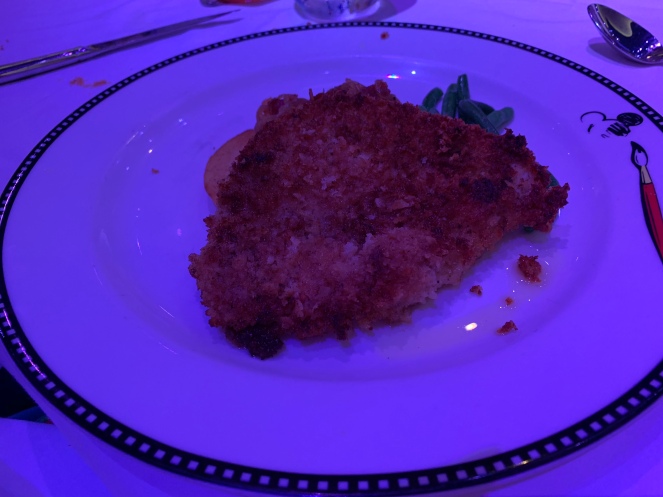 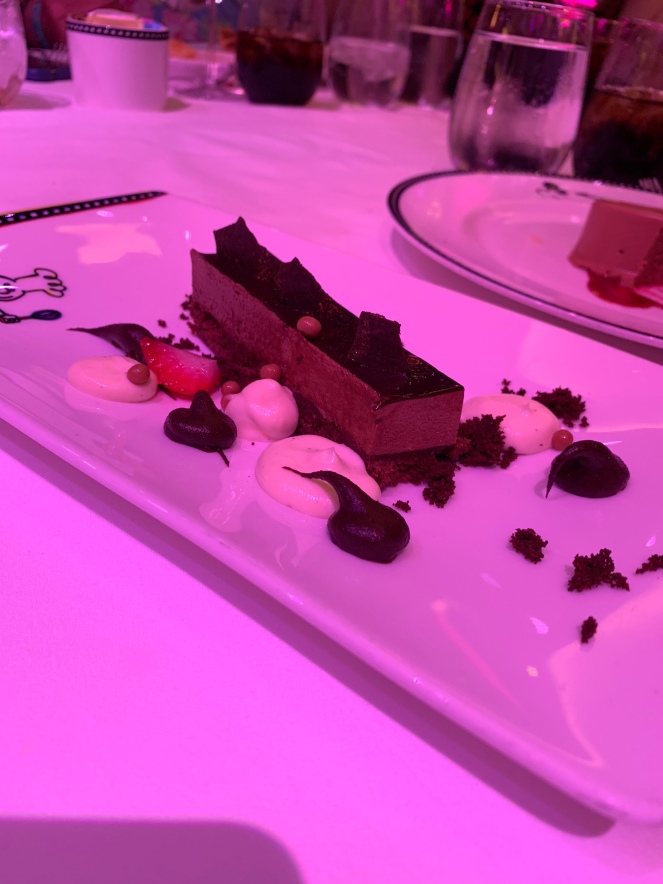 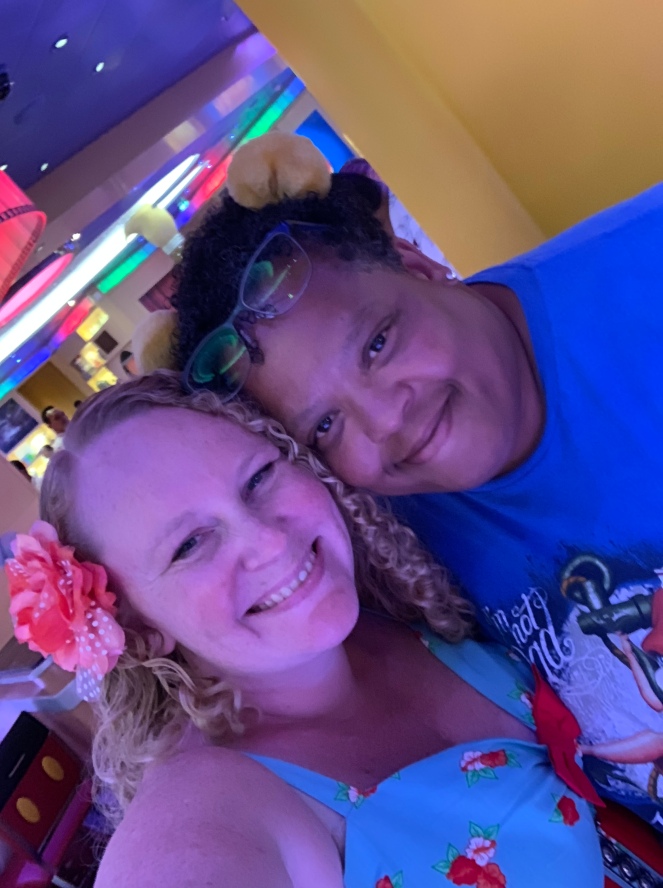 Then it was time for the cutesy drawings show! It was so awesome 😍😍😍 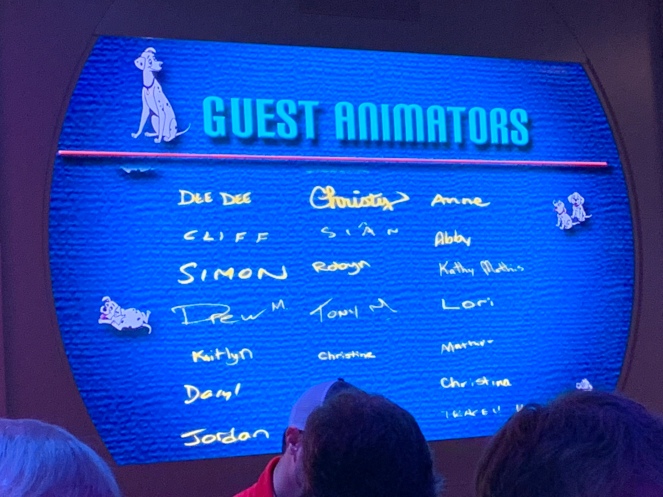 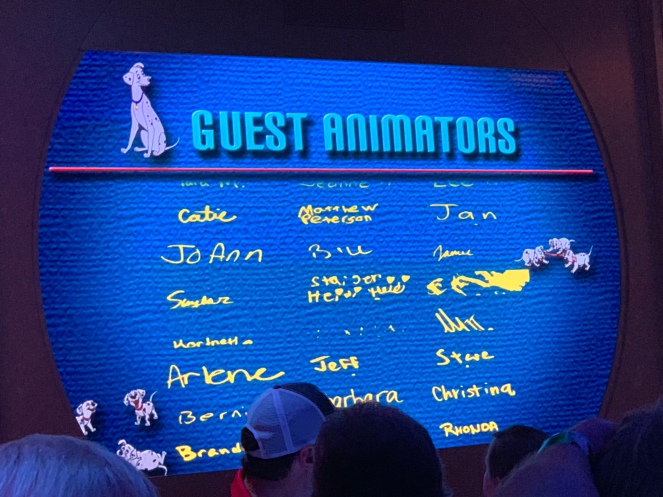 Dinner over we split up some, my parents went to bed, Anne and Cliff went to finish packing and we went to the shop as Simon had seen a David Doss picture he wanted to buy. Then we gathered in the atrium for the ‘see ya real soon’ show. I’ve never seen this before, the characters were all introduced and came down the stairs to do a short meet and greet. Then they gather on the stairs and say goodbye together and then at the top individually. I’m afraid there seemed to be a lot of pixie dust around and I got some in my eye… I look over to Anne and she seems to have some in her eye too 😢 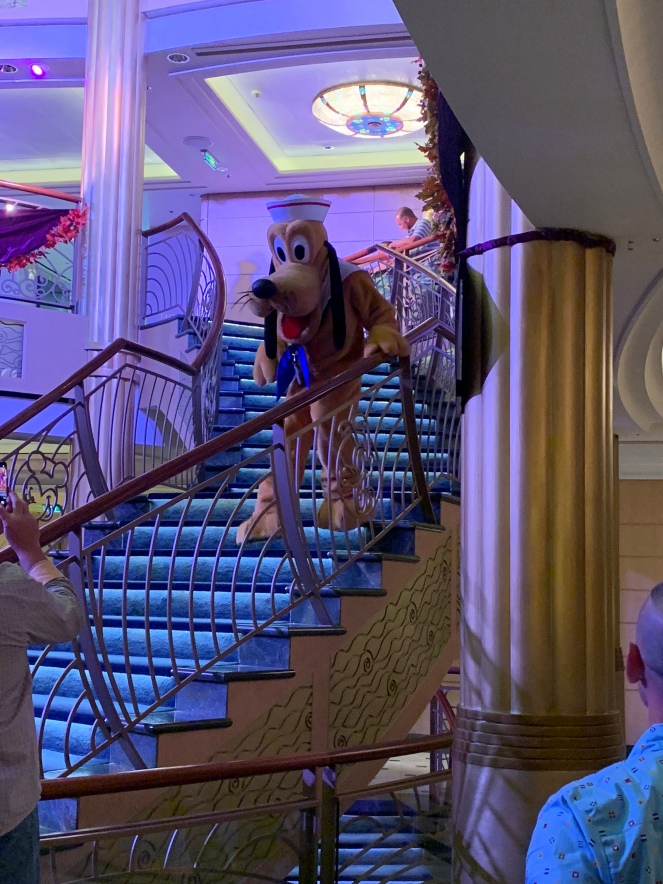 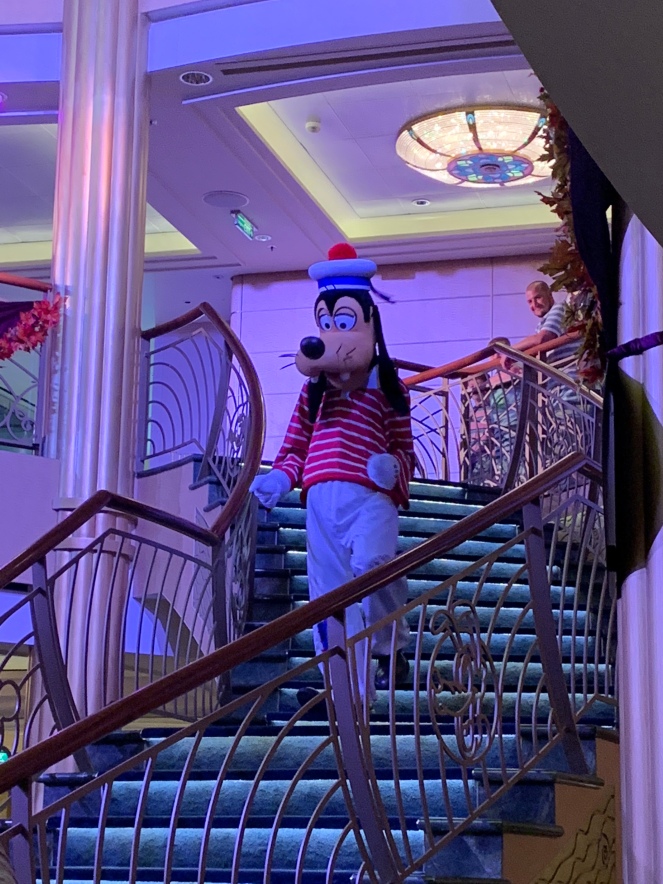 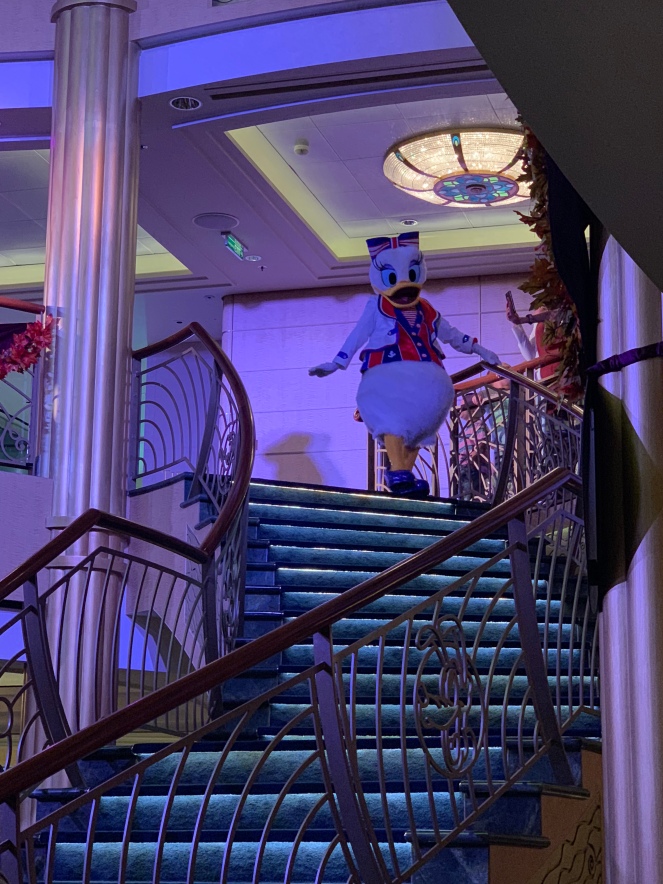 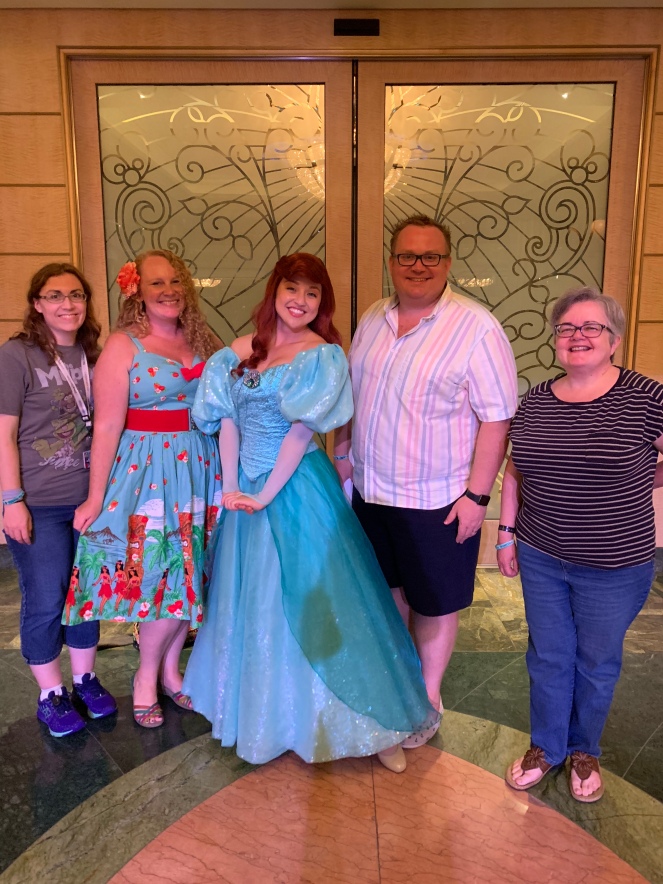 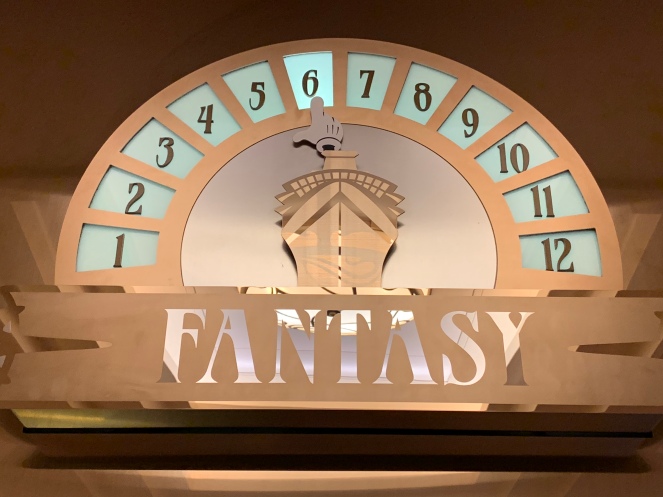 Afterwards we said our goodbyes and made our way to our rooms for the last time 😭 I was so not ready for this to be over!

Back in our room we sorted out the final bits and pieces. We also realised by the in room navigator that the Disney Dream ship was about to pass us so we went out to the veranda to wave (like they could see us – there are miles away haha). Was pretty neat though. 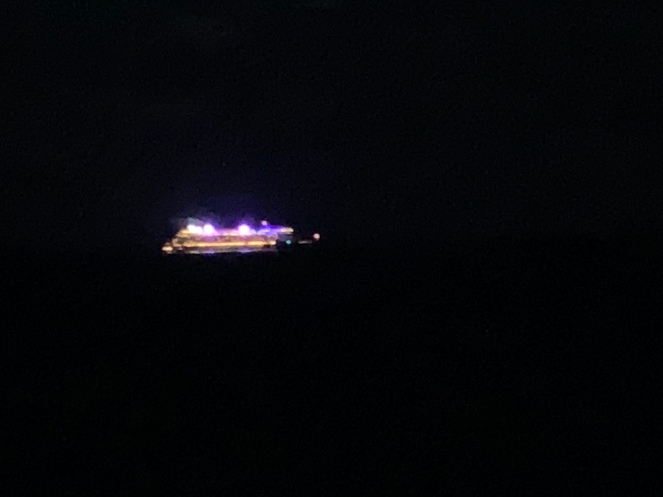 Then it was time to snuggle down in bed for the last time in our amazing bed (I want to steal the mattress, pillows and duvet – they wouldn’t notice right?!).

Tomorrow, leaving the Disney Fantasy and arriving back to Walt Disney World. With a trip to centra care thrown into the mix.