Even though we didn’t get to bed till 2:30, we were still up reasonably early…. For some un own reason. Sy took aaaaages getting ready to go so I went on ahead without him into Epcot – hello, Disney is waiting! 😂

As I was walking around World Showcase I found the character spot open! A little known gem between the UK and Canada pavilions where at certain times random characters come out to say hello. Most of the characters were the usual – Winnie the Pooh, Pluto etc but Rabbit was also out so I just had to meet him! We had a great conversation about gardening and growing carrots. The next people in the queue took lots of pictures for me (I then returned the favour for them). 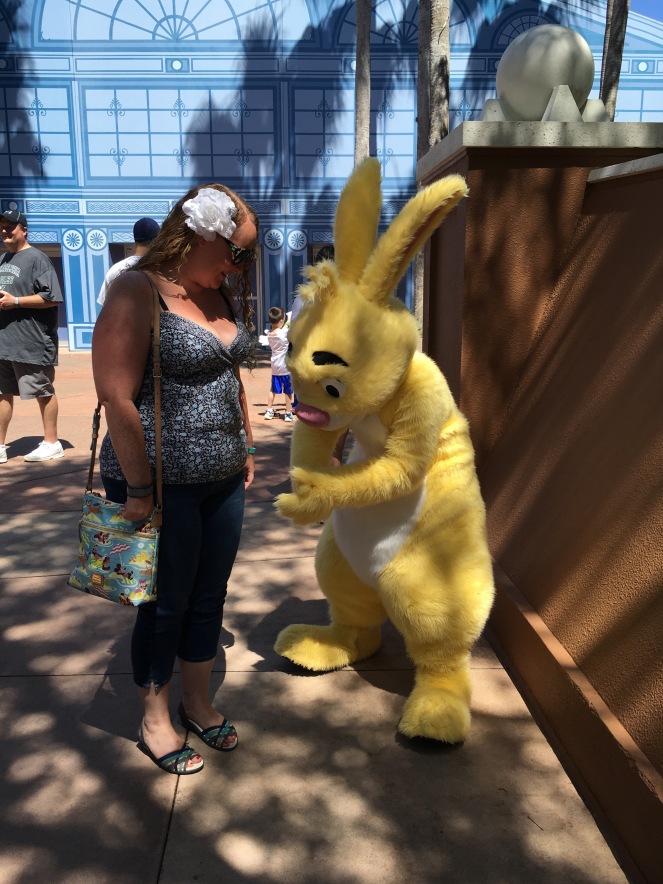 I then made my way over to Test Track. Sy joined me when I got there and we rode together. 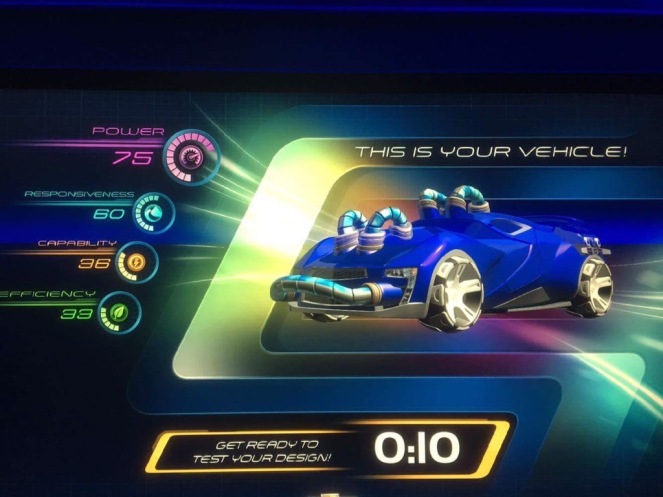 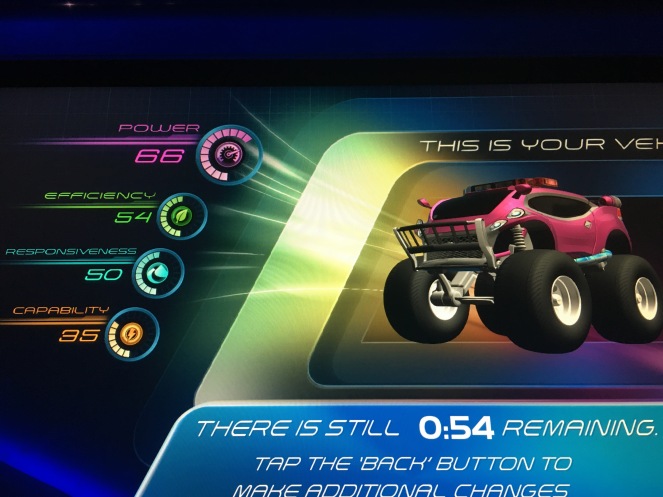 We decided to try sampling some more yummies from the flower and garden booths – neither of us had eaten anything yet so we were quite peckish. 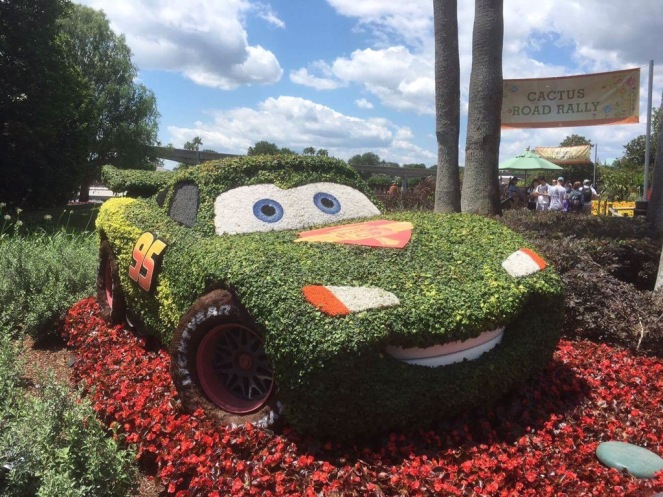 First stopped happened to be one of the drinks I wanted to try, the Tiki Torch. Passion fruit slushie with vodka – what’s not to like about that? It went down wayyyyy to nicely (and quickly 😳) 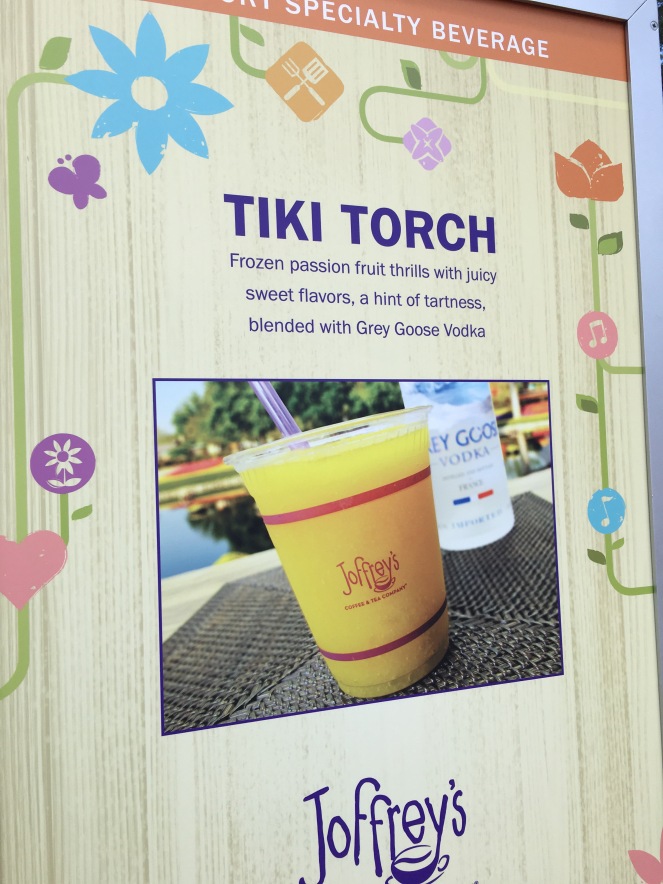 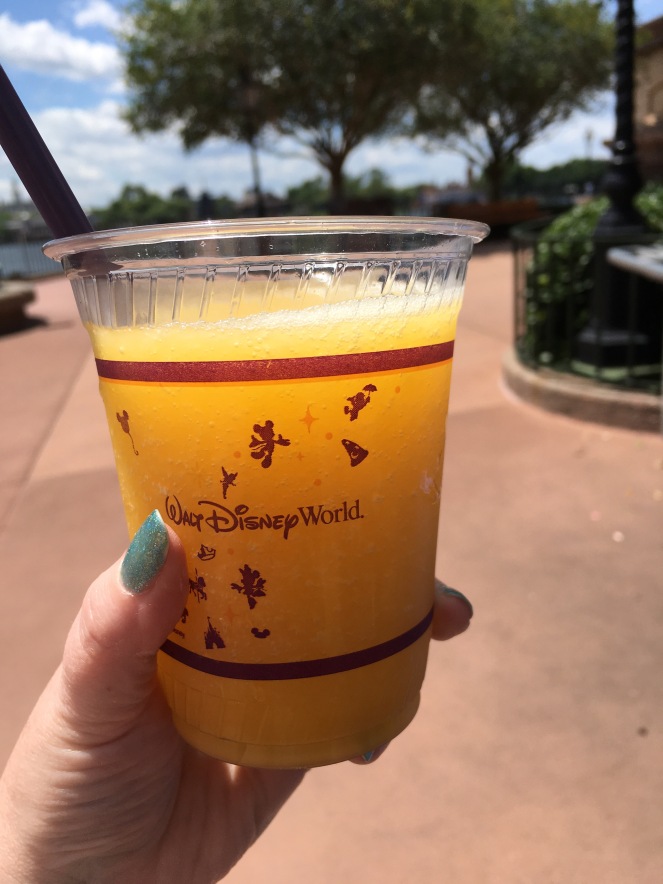 We stopped in Mexico to get a mushroom quesadilla.

And then Sy got a currywurst with paprika crisps.

Next up was Japan. I wasn’t a huge fan of this as I’m not a huge edamame fan.

Sorry not sure what this next one was!

And then it was time to stop in France for more alcohol. La vie en rose and an iced tea push pop. I preferred the slushie and Sy the push pop so that worked out quite well. 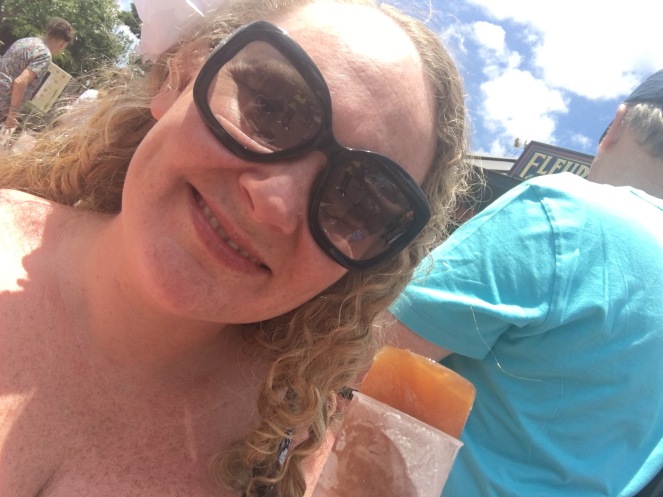 After that picture it was then we realised it was really hot out, and we had only drunk alcohol so far and not eaten much at all (or at least I hadn’t!) So we made a quick stop for something non alcoholic… And some burnt ends for Sy.

We met up with Lorraine while round the showcase. She wanted to get something for her mum for Mother’s Day inside the Japan pavilion so we made our way back there for a mooch around the shop.

The girls were all dressed up in the traditional kimonos having professional pictures taken. Don’t they look gorgeous?! 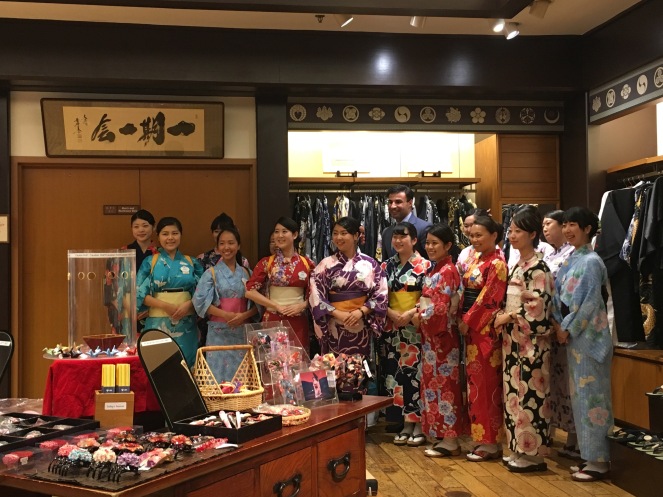 It was soooo hot out that we didn’t stay for too long after that. We made our way back to the hotel and had a nap – Lorraine was off to another park too.

After a well deserved nap we got ready to head back out again. Next on the plan for the day was Animal Kingdom with Ali. We met up by the entrance and went in together.

We got some pics while we waited.

Ali went to meet Russell and Dug as she had her Up ears on, while we went to try and ride Dinosaur but it was down so we walked back up again to wait for Ali.

Dinner tonight was Yak and Yeti. This was a first for Ali! As Ali would say… It’s too much flavour for her 😂 but if managed to twist her arm with the promise of the kids meals offering chicken nuggets… So off we went towards the restaurant. Sy and I were particularly hungry by now, I think we resembled something along the lines of this…

We went in and were seated right away thanks to the Landry card I had recently bought online. Definitely worth buying one if you ever want to eat here or Rainforest cafe, T-Rex (among others). It costs $25 to buy but you get that back with your first purchase and you get $25 on your birthday month (which of course meant mine was this month 😜😜😜).

We placed our order and while we waited I couldn’t wait to try on Ali’s Up ears. I’ve actually ordered my own after seeing these, they are amazing!

I decided to have the chicken tikka masala as I always have food envy when someone else orders it. Sy went for steak and shrimp. We got some pot stickers to start but when they arrived they were cold so we asked for some more. That was no problem, but the manager came to personally apologise and tell us she would be making sure they were hot when they came back out. She also wanted to welcome us as Landry members. Felt like real VIP’s 😋

The food was sooooo good! 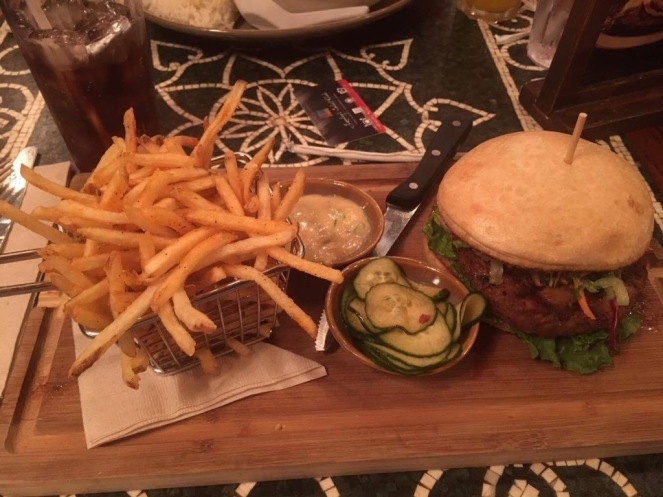 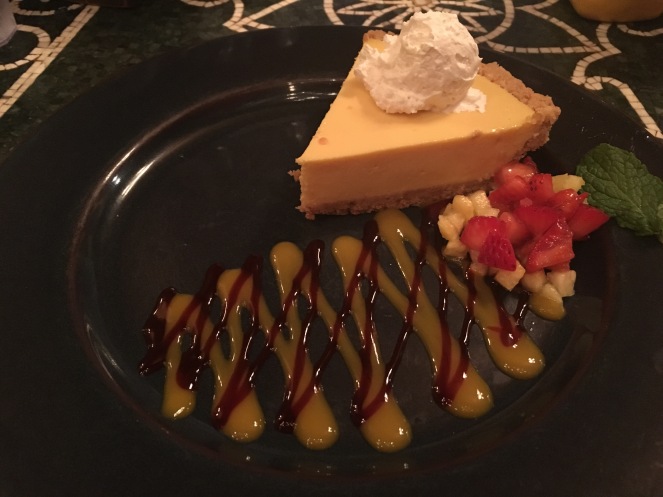 We paid up with a nice $50 off the bill, and then made our way out of the park. It was way past park closing so we got yet more empty park pictures! Woohoo! The sun was just starting to slowly set. 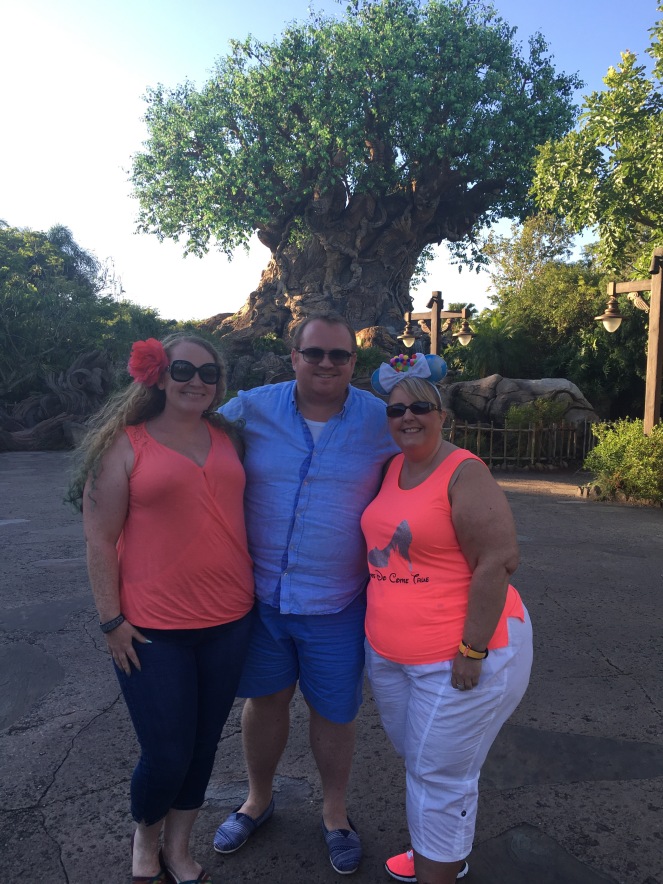 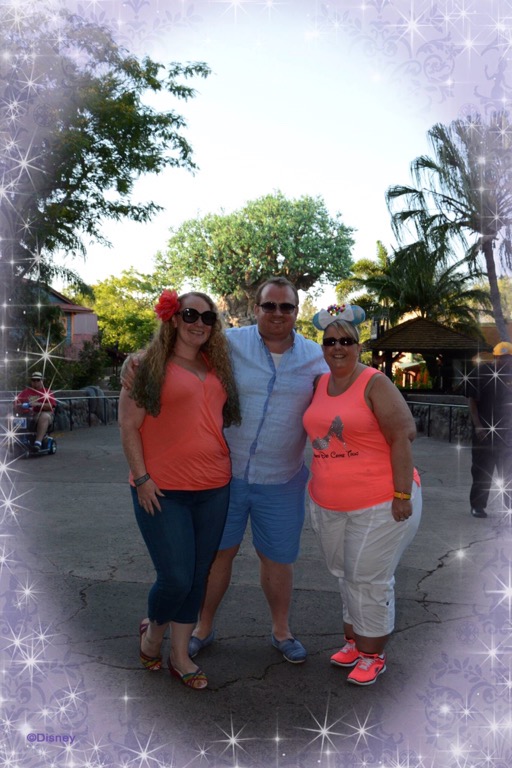 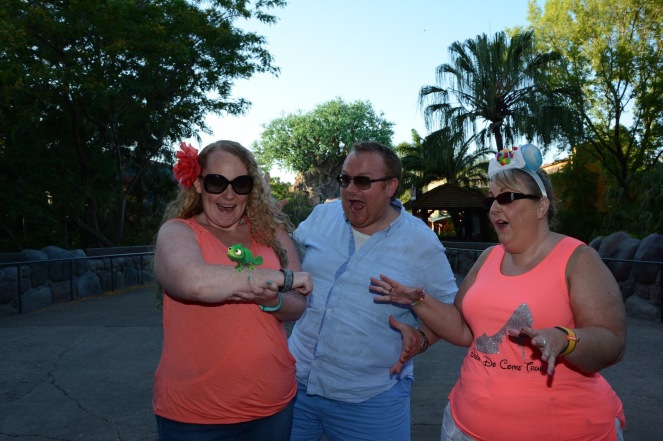 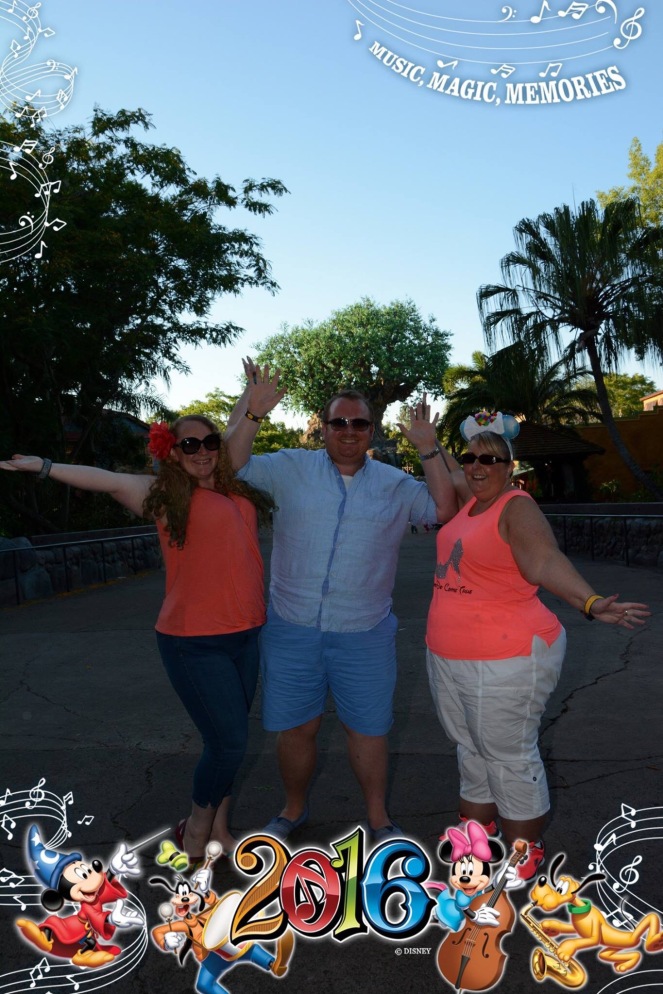 We decided to pop to the Florida mall quickly to try visiting the Apple Store. Yesterday on the way out of Fantasmic I dropped my phone and a kid behind me decided to stamp on it and kick it 😮 it was quite deliberate, as I watched him do it 😔 unfortunately it had cracked the screen. I was sooooooo annoyed. I take care of my things (usually) so I’ve never had a cracked phone screen before. I was just annoyed that I’d dropped it (okay I was slightly annoyed about the boy and that his parents instead of telling him off just tutted at me for being in their way as I turned round to pick it up). I know #firstworldproblems so anyway, I wanted to see if I could get the screen repaired. Plus I really wanted to go into Hot Topic to see the Disney stuff so kill 2 birds. Ali decided to come with us for a quick look.

First stop was the Apple Store, they made me an appointment in the Genius Bar for 15 minutes before store closing so we had a bit of time to kill. We went to hot topic and for a look in Carlos Bakery. Didn’t buy anything in either though. 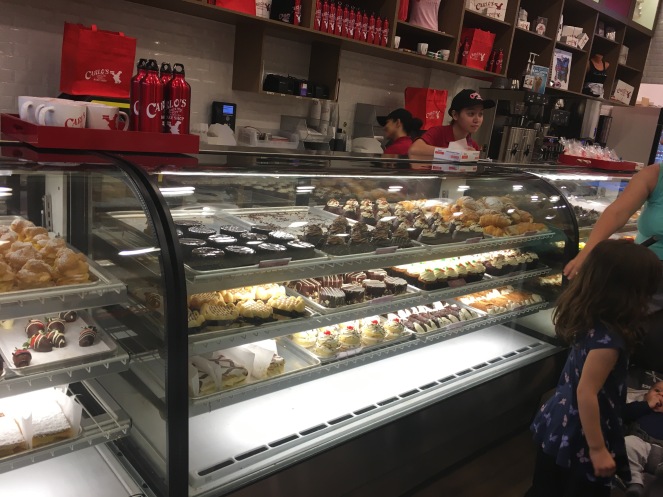 Time was getting on to go back to the Apple Store, but we still hadn’t been to bath and bodyworks. So we decided to send Sy off to Apple with my phone while Ali and I ran up to Bath and Bodyworks to grab a few bits before they closed.

When we came back Sy was still waiting to be seen but the guy came out to talk to us right away. He said that they couldn’t repair the screen today as they needed an hour to do it, he seemed as perplexed as us as to why they booked me an appointment just to say that and they couldn’t have told us that when we went in with the broken screen. Hmmm. I was a bit ticked off but hey ho #morefirstworldproblems They tried to make me an appointment for the next day but we were nearing the end of the trip and I didn’t want to come back so I decided just to fix it when I got home.

We wandered back to the car and set off back to Disney, dropping Ali back to Pop before heading home to the Boardwalk. It was about 10pm when we fell into bed.