The alarm went off at 7am this morning, not that we actually got much sleep mind you – too excited! I mean does anyone ever get much sleep the night before flying to Florida?? We quickly showered and got dressed and by 8:10 we were leaving the house like excited little children.
Selfie in the car on the way, Sy’s lovely dad was giving us a lift. 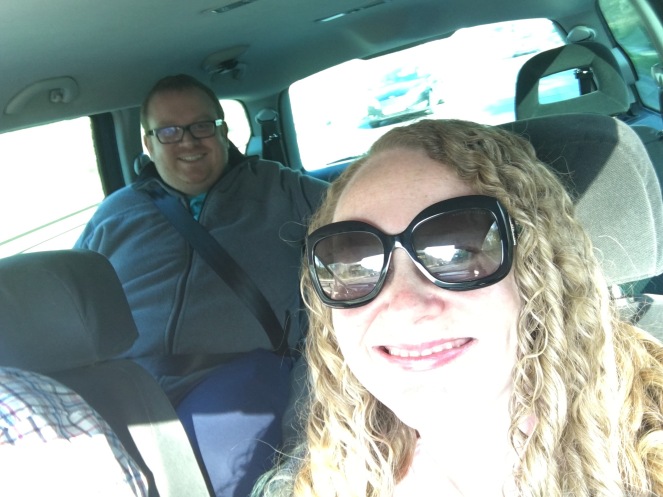 At the airport we had to quickly stop by the check in desk and then made our way through to premium security. It was nice to have and we were through quickly but tbh I’d never pay for it, but then ask me again when I’m in a queue for 45 mins and I might change my mind hehe 😉

First stop once through was to buy a boots meal deal for me in case I wouldn’t eat on the plane (Sy got one too). We then went to find some breakfast, we settled on pret. I had a croissant, my usual go to breakfast; I’m not a huge breakfast eater. Sy had a hot sausage muffin which he said was really good. My croissant was still warm so it was extra yummy. 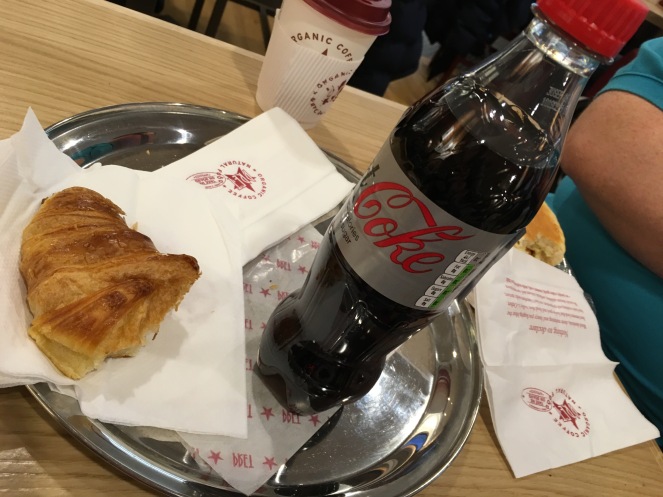 Afterwards we went for a mooch round the shops, I’d been eyeing up a new bag in Ted Baker but sadly for me (and luckily for Sy’s creditcard) they didn’t have it. Boo! We then decided to go down and wait at the gate, we were actually the first there.

There was a little delay before they started boarding us, which meant we were a bit late taking off as well. We made up some time in the air though so it wasn’t too bad. 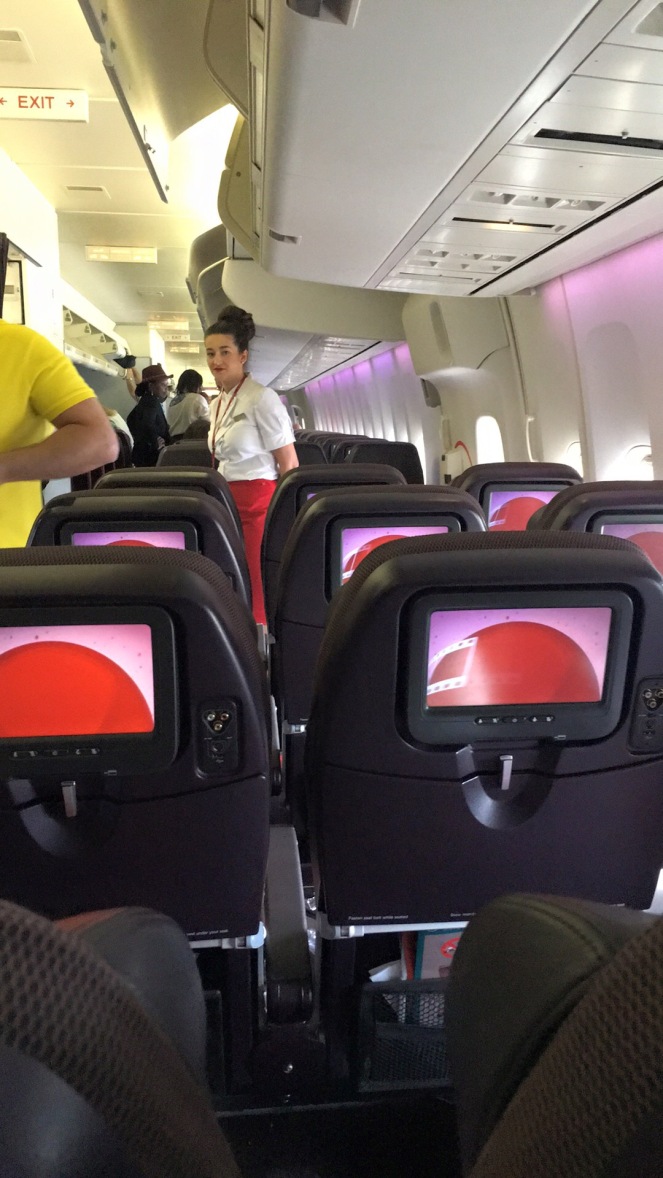 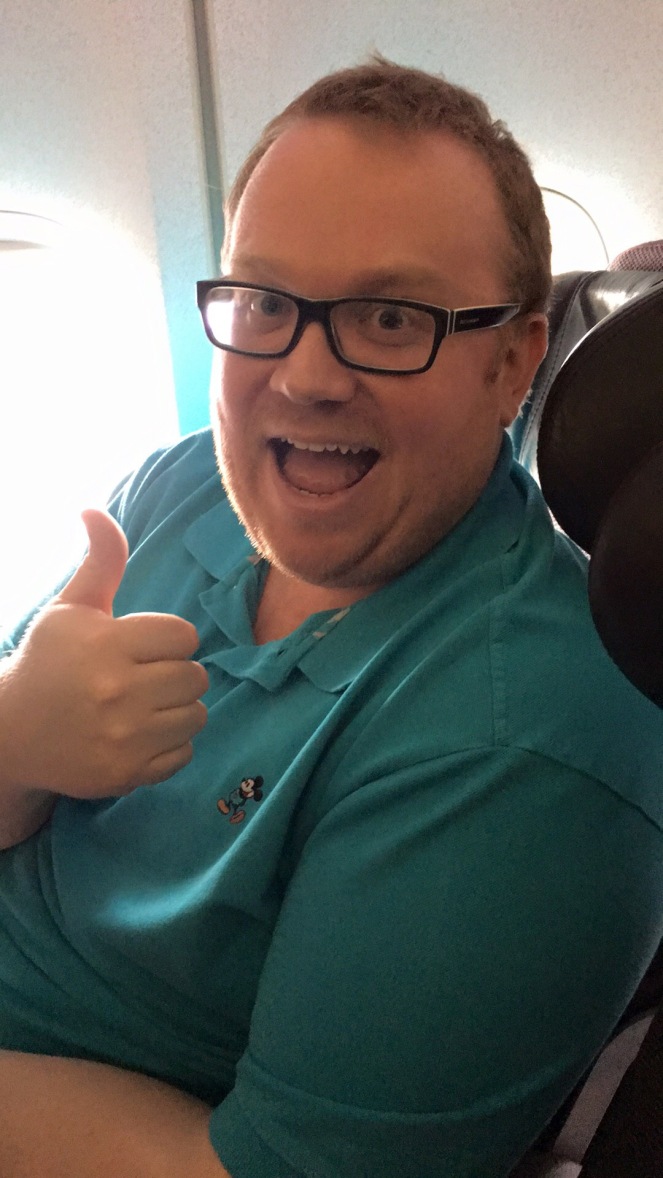 Our flight was pretty jam packed. Virgin usually have 2 flights per day but because it was out of season and a Tuesday they had merged the flights into 1 (hence us getting bumped to the earlier flight). I was very pleased we booked the extra seat so we could have a little more space, there weren’t many spare seats at all.
I passed the time on the flight watching a few films. I started with the Good Dinosaur followed by Sisters and finally The Intern. They were all ok films, I’m in no rush to watch any of them again soon though 😉

The food was pretty rubbish, worse than I’ve found it in a while. Sy and I both had the Somerset chicken. Dessert was a salted caramel gu pot which was yuk (I forgot to take pics – sorry!). Afternoon tea came later, the crisps were now LEMON flavoured. What is that about?? They were seriously RANK! I am not a fan of lemon at all. It’s ok though, they give you a mint for after so I quickly popped that in my mouth… Only they decided one lemon flavoured thing wasn’t enough and they added lemon to the mint too 😡 that go spat out too 😂 luckily the chicken wrap was ok though 😜 plus I had the boots meal deal to keep me going. 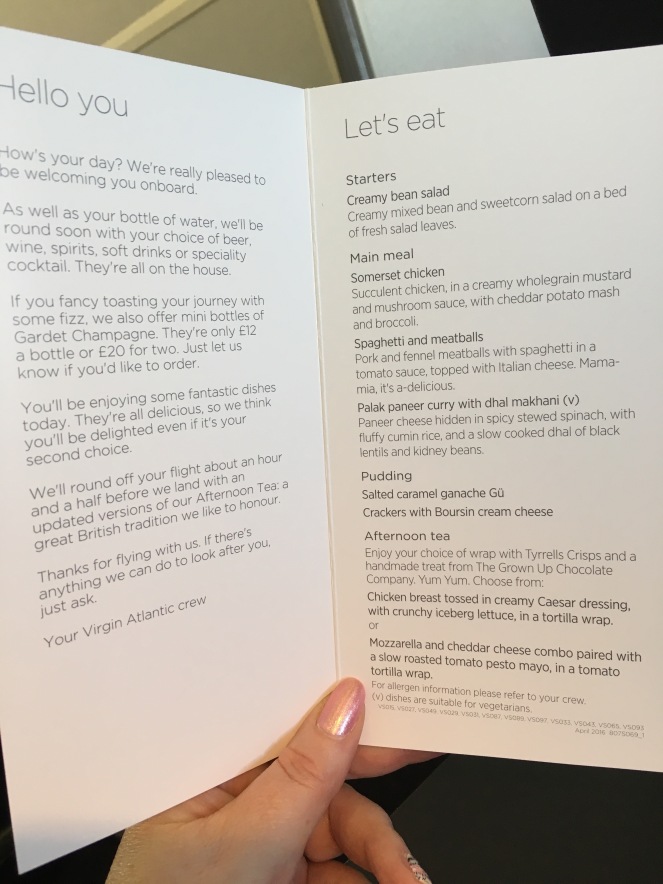 Before we knew it we were arriving in Orlando international airport, the time really seemed to ‘fly’ by 😂 *thank you, I’m here all week* 😂

We were about half way down the plane so there was a little wait at immigration, we quickly spotted Ali the other side of the glass waiting for her bag from the BA flight. We were arriving in Orlando around the same time so rather than Ali getting a taxi to Vicki’s house (where she was staying for 5 nights) we said we would give her a lift.
Sy wasn’t taken away due to his visa for once which was a nice change so it meant we were through and waiting for our bags in no time. Ali’s bag arrived just as we got through immigration and ours were there about 10 minutes later, perfect timing! As we went through customs we were sent for a second bag screening, this as a first for me and Sy but Ali said it happens to her every time… I guess she looks dodgy 🙊😂
We went to get on the monorail over to the main terminal. Sy and Ali went up the escalator but I had to go in the lift. There was a monorail waiting as I arrived so I motioned to them from the opposite end of the platform to get on so they rode on one end while I was at the other. It reminded me of the time I came for a girly week with Jan when I arrived a day earlier, getting the monorail all on my own 😍 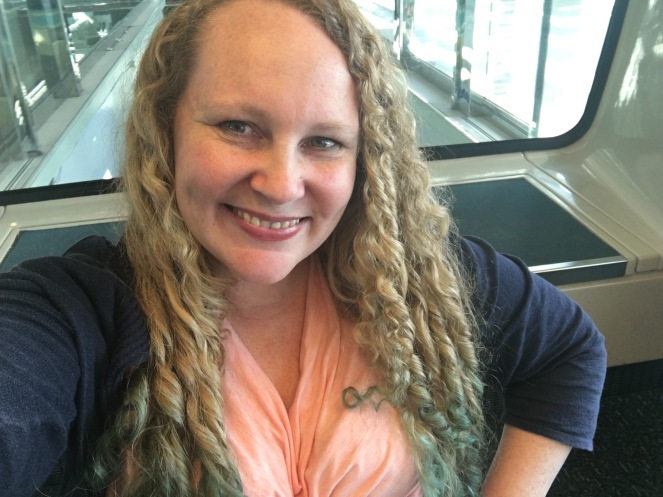 We met up again the other end and made our way down to the car hire desk. There was a bit of a queue so we used the little kiosk to check in for the car. It took ages and then when it got to the end it timed out and told us to go to the desk! That was annoying. Luckily it didn’t take long at the desk and we were soon on our way out yo choose a car. There actually wasn’t many to choose from at all, we should have had a mid size SUV but we ended up with a people carrier, it was nice though and very comfy so can’t complain too much.
Selfie in the car… 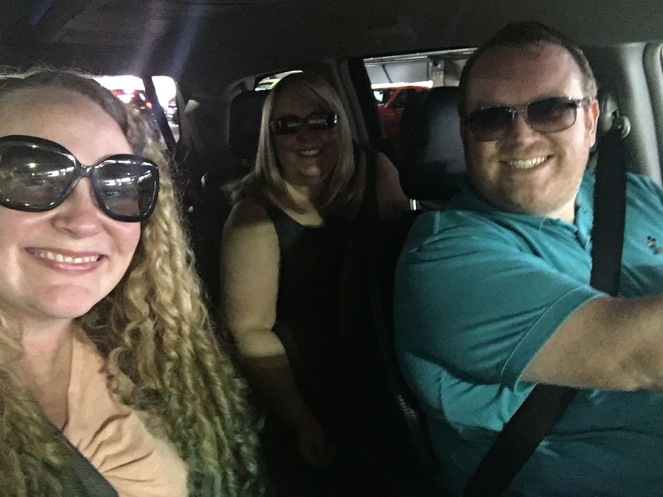 I put the satnav on and we were soon on our way to DISNEY!! Or more importantly to Coronado Springs where we would be staying for our first 5 nights. We’ve never stayed in a moderate before. Sy’s only stayed deluxe but I stayed in all star sports last year on the trip with Jan.

I was pleasantly surprised by Coronado. I really loved it! We were the Cabana’s section 9A, room 9273 which was a huge corner room. It was lush! I’d totally jump at staying there again. Ali was still with us as we decided we would come to see the hotel first. She liked it too 😊
Of course we had to get some new purple magic bands, gotta complete the set (one in every colour hehe). Sy saw the funny side of what I named them haha

We unpacked a little bit, cause we had a fair amount of Ali’s things we brought over for her (girl doesn’t know how to travel light 😂) so Ali could take them to Vicki’s house, and we had things we needed to take over to Carrie’s house later.
Afterwards we were all a bit starving so we decided just to get a counter service here at the hotel. Ali and I walked over while Sy drove the car (so we could take Ali right after). The restaurant was empty which was half good and half bad – good cause it was nice and quiet but bad because it turned out the food had been sat under heat for a loooooong time. Sy had the burger while Ali and I both got the chicken tenders. Sy and I just shared a drink but I noticed on the receipt we had been charged for 2 so when we’d finished I went up and mentioned it at the counter, the manager came out and refunded it to the room. I mentioned to him that they might want to throw the chicken tenders away as they weren’t very nice now (I didn’t actually eat much of mine as they were so hard they were giving me jaw ache haha), he refunded them as well! I didn’t say it for that reason, I ate half of them when I could have just returned them and asked for fresh ones (I was being lazy and I was starving which is why I didn’t), but he insisted on giving me the money back. How lovely ❤ 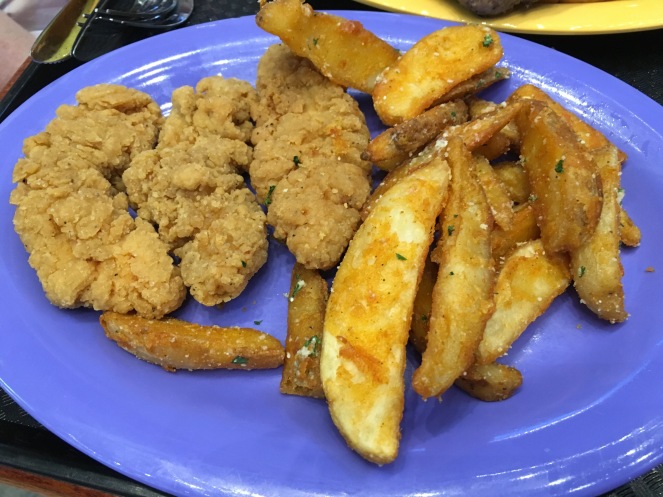 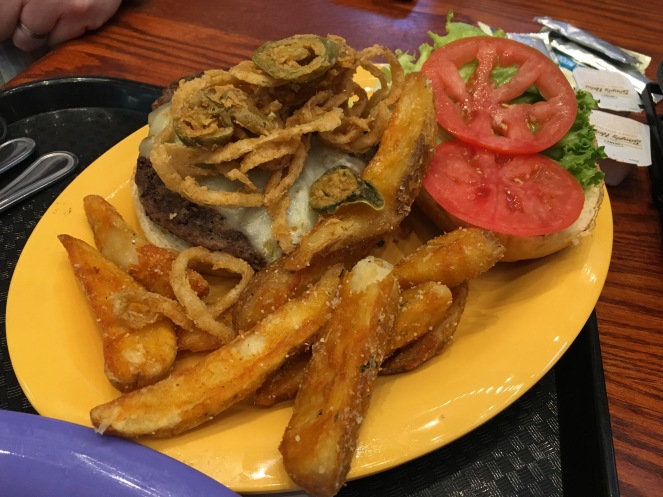 When we were all finished we hopped back into the car and made our way towards Vicki’s house. Vicky lives in Windermere so we got to drive through the Magic Kingdom gates. 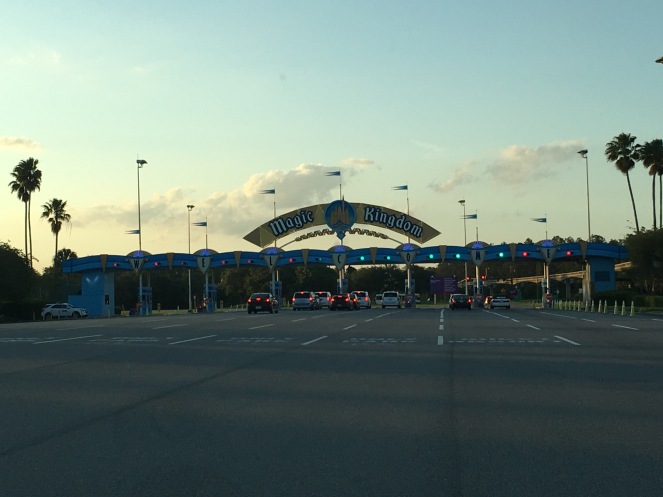 We arrived 15 mins later and stopped in for a quick chat, we couldn’t stay long though as we were heading over to Carrie and Mark’s house. We made plans to meet at my French cafe the next day though for a proper catch up.
We then made our way over the Carrie’s. I had told Carrie before that we might be minging from the flight as we weren’t sure we would have time to shower first, she had put a note on the front door that said “if you’re a minging, don’t come a ringing” 😂😂😂 laughed so hard when we saw that 😂😂 Sy had sneaked in a quick shower while I was sorting out Ali and Carrie’s things from our cases so it was just me who was minging lol I still knocked though 😜
We spent ages there chatting and cuddling the kitty’s. We were scheduled onto a periscope line up, we had hoped to be back in Disney by then but we weren’t so we ended up scoping from their living room! Oopsy! Too busy chatting and not paying enough attention to time – time flies when you’re having fun as they say.
Mark had been making cookies so we were treated to warm cookies while we were there and we were even given some to take with us (they made a great pre breakfast snack the next morning hehe).
We left there and arrived back at our hotel for 10:45, quite impressive to still be awake seeing as it was 3:45am by then to us.