Surprisingly I woke up at 7am after just 6&1/2 hours sleep, I tried sleeping a bit more but I couldn’t nod off again so instead I watched some tv, wrote up some notes and then when I was suitably bored I got dressed and headed out to get some breakfast, leaving Sy sleeping. I ate some fruit and croissants in the lounge and then grabbed some more stuff to bring back to the room for Sy who woke up just as I walked back in (it may or may not have been a coincidence that I let the door shut loudly behind me… hehe).

I had a shower and washed my hair while Sy ate his breakfast. We then facetimed home to let them know we were still alive.

We got dressed and headed to Epcot, arriving at 10:45. I was surprised that it didn’t actually feel that busy considering it was the beginning of Thanksgiving week, I’d read real scare stories online so I feared the worst. It felt quieter than a normal food and wine day = so pretty empty!

We had a fastpass for Spaceship Earth so we headed there first. It’s a traditional first ride for us.

We walked towards the fountains and grabbed a couple of photopass pics. (And a quick selfie) 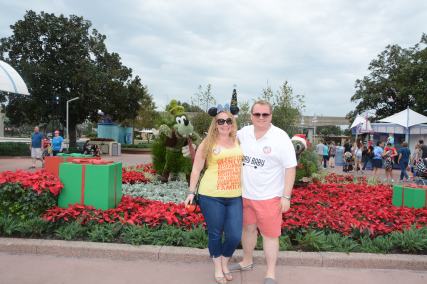 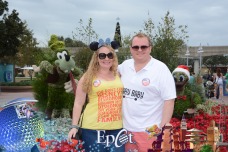 Afterwards we went over to get a return time for Test Track before heading to the World Showcase for a wander round.

We sat down watching the world go by for a bit while we waited for Lea, her cousin Alex and her son Luas to catch us up (Luas was such a cutie, might have to steal him!). They were also in Epcot today so we had kept in toouch online and agreed to meet up somewhere.

When we did finally meet we went to meet Mulan but sadly she was just finishing and not returning for a while 😦 I was a bit gutted as I was wearing my Mulan top, ah well.

We walked round a bit more and eventually went for lunch in the American pavilion, a new one on me. I had the good old faithful chicken nuggets. Sy went with Alex to Japan to get some sushi, they were there and back before we had ordered and got our food

I have no idea what the hold up was as there was pretty much no queue.

Food was good, the boys enjoyed their sushi too. Was lovely sitting chatting over lunch with Lea and her family. In fact I was enjoying it so much I forgot to take a pic 😦 Shameful empty plate pic…

Afterwards we said goodbye and headed further round world showcase. But not before I grabbed a pic with Lea (I remembered to get one today!) 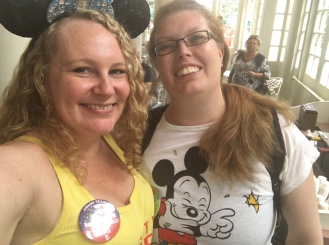 We stopped in the UK to watch a new band called Quickstep, 2 Scottish and 2 Americans, I guess its going in the right direction in that at least half of them were British now compared to the fake British band who play there (British revolution is it?). They were pretty good, we couldn’t stop for long though as we were running late for our Fastpass at Soarin’. We realised yesterday at dinner that our Fastpass overlapped with Rachel so we met up at the entrance and rode together at 2:15

Sy’s mum had an operation on Friday and was feeling poorly still so I tried to periscope the video so she could ride along with us, but sadly I couldn’t get the internet to work in there. Instead I filmed it and sent it to her once we were outside, she said later it made her day ❤

Test Track was still down as it had been for a while now so we decided to call it a day and head back to AKL – that 6&1/2 hours sleep was obviously not enough.

Back at the hotel I decided to have a nap and accidentally slept for 2 hours 😐 oops! Clearly the last few days were catching up with me.

I woke up feeling a bit rough, nevertheless we got dressed for our special dinner at California Grill. CM’s at the club desks gushed over our outfits *awww*

I went to grab a picture of the offerings in the lounge tonight. (sorry about the rubbish quality!) 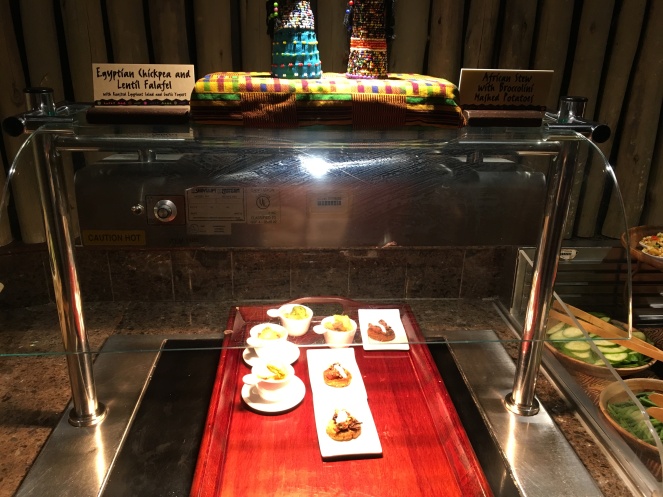 We got some pics downstairs by the Christmas tree before hopping in the car and heading over to the Contemporary. 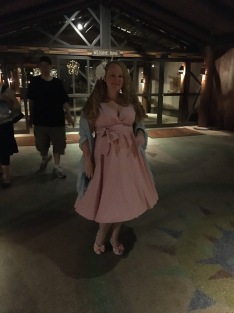 I was still feeling rough but trying to suppress it. We went to check in and were shown to the lifts to take us up. The lady in there ask if we had been before, when we said no she told us we were about to have the best meal of our lives. I’m all for pride in where you work but that did feel a bit pretentious I must admit.

We were shown to a window table – amazing! Sadly this is where the amazement ended. We were handed menus but to my dismay the menu had changed from what was on the Disney website – I had checked it the day before and again that afternoon to make sure there was still something I could eat. But that was no where to be seen. And now there was nothing I could eat. Craaaaaaaaaaaaap. Our waiter then came over and gave his 10 min speech on the menu without pausing for breath like he had done it a million times before (which he of course had). I managed to get a word in at the end to ask about the change in the menu, he said it had been changed for months but not updated on the website, apparently Disney is really bad for that?! I clearly looked uncomfortable about it but he didn’t say anything or ask me why he just left the table. He certainly didn’t make me feel like I could ask about adapting the menu to be able to eat something. I started to freak out a bit about what I was going to eat and making a scene (I hate the chef coming to the table, I don’t like being the centre of attention cause of my food problems), and then of course the ill feeling I’d been suppressing came back and we had to leave 😦 I spare you the details.

We went back down to grab the car from valet and headed back to AKL.

Sy went to the Mara to get some dinner and brought it up to the lounge where we sat watching some tv. 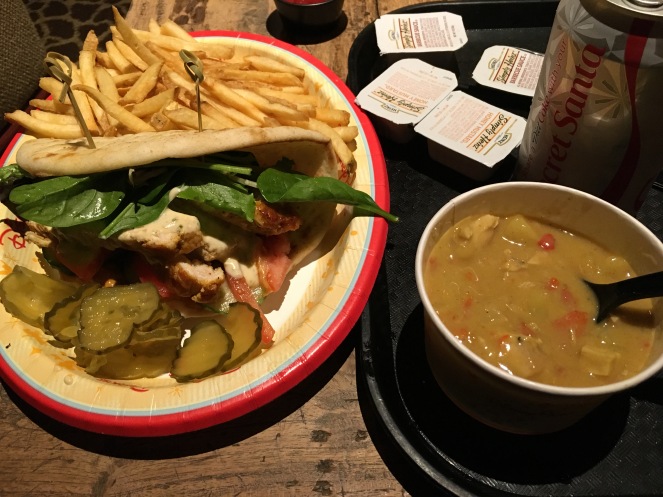 They changed the service over to dessert while we were there, desserts were a smooth chocolate ganache and mango tarts (with the daily cookies). The Mango tarts were to die for.

Sy got a couple of beers hahaha (the most he had allllll trip).

We finally went to bed at 11pm and watched a bit of Muppets Christmas Carol.